We are very pleased that the first set of records from Brompton Cemetery is now on the database. 65,000 records were uploaded this week. They include coverage of the first three decades: 1840 to the early 1870s. The original registers are held at The National Archives in Kew but are only available as scans online through Deceased Online.

Brompton Cemetery is famous for being one of the ‘Magnificent Seven’ of London’s 19th century private cemeteries. By 1832, the burial grounds of London had become overcrowded and breeding grounds for disease. To counter the problem, Parliament passed bills allowing the creation of commercial cemeteries in the more rural suburbs of the City. In response, private cemetery companies built the following seven cemeteries over the next nine years:

The West of London (and Westminster) Cemetery, Brompton, as it was originally known, was designed by Benjamin Baud as an open air cathedral. Today, Brompton is a Grade I-listed garden cemetery, situated in the Royal Borough of Kensington and Chelsea. In 1996, after decades of closure, it re-opened for interments and the deposit of cremation remains. The Royal Parks (TRP) manage the Brompton site, but much is maintained and restored thanks to the work of the Friends of Brompton Cemetery. As part of their work, the Friends offer regular guided tours of the 39 acres, including the tree-lined Central Avenue, and the Grade II-listed domed Chapel, colonnades and Brompton Road gate.

Like the other Magnificent Seven cemeteries, Brompton is an oasis for wildlife, including birds, bees, butterflies, foxes, trees, shrubs and flowers. It offers a welcome breathing space and calm away from the bustling streets

Over the next few weeks I shall be looking further at Brompton, at the many celebrated names who feature in the records, and at the some of those buried beneath the twenty-seven Grade II-listed monuments. The Commonwealth War Graves Commission maintains 289 First World War and 79 Second World War graves here. 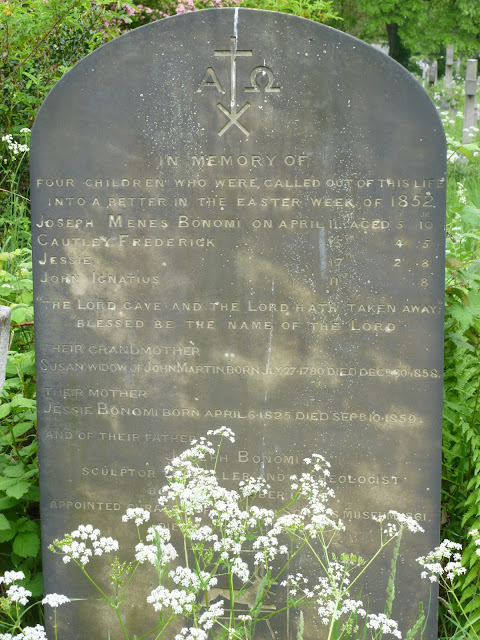 
To celebrate the launch of the Brompton Cemetery records, we are giving away 8 copies of Darren Beach’s fascinating London Cemeteries (Metro Publications, 2011) to our blog and Facebook readers over the next 4 weeks. We’ll ask 2 questions each Thursday and winners will be announced via our Twitter and Facebook pages.


To enter the competition this week, please email info@deceasedonline.com with the answers to the following 2 questions by no later than midnight Wednesday 29 May:

(i)                 Which of Beatrix Potter's great literary characters is said to have been inspired by a memorial in Brompton Cemetery?

(ii)               Name the sugar merchant, philanthropist and founder of one of London's most famous art galleries, buried in West Norwood Cemetery?