August 08, 2013
Following on from last week's post, I'm looking further into Deceased Online's latest collection of burials. These military burials were digitized in partnership with The National Archives.

Two notable institutions in the collection are Haslar Royal Navy Cemetery and the Royal Victoria Hospital in Netley. Both Haslar and Netley (as it was more commonly known) were Britain's foremost military hospitals during the bloodiest years of war in the western hemisphere

The Royal Hospital Haslar dates from 1753. For over two hundred and fifty years Haslar served as one of main hospitals caring for sailors and marines of the Royal Navy and merchant services. Patients came from ships as well as from naval and seamen institutions in nearby Portsmouth and Gosport. The hospital closed as the last official military hospital in 2007.

The Haslar Cemetery closed in April 1859 but the neighbouring Clayhill Cemetery was opened to continue naval burials. A recent excavation of some of the thousands of men (and some women) who are buried in the grounds discovered that many of the burials were for those who died of scurvy, the scourge of British sailors, and post-amputation infections.

The burial records in the Deceased Online collection of Haslar cover 1826-1859, and those of Clayhill from 1826 to 1911. During this period, men served in the Crimea, Zulu and Boer wars, as well as in conflicts in other parts of the Empire. Those who were not involved in active conflict were also prey for disease, shipwreck, the rigours of life at sea, and tough climates. Retired or older sailors who had served in the Napoleonic wars also feature in the records. The burial entry below is for 57 year old William Hambleton Hamerton who had served as Gunner aboard Lord Nelson's famous ship, HMS Victory.

The grounds of the cemetery contain not only headstones for many of those in the registers, but also large memorials to sailors and marines of conflicts and deaths at sea, or from accidents like the steam boiler explosion on HMS Thunder in 1876.

The Royal Victoria Military Hospital, Netley, Hampshire
Queen Victoria laid the foundation stone of Netley Hospital on 19 May 1856. The hospital was built in response to the high number of ill and injured of the recent Crimea War. The site of the hospital, near the port of Southampton, was chosen specifically for its proximity to the coast. Ships would bring soldiers into Southampton, from where they would be swiftly removed to Netley. Injured men were brought there from across the British Empire. Both physical and psychiatric conditions were treated, with the first official army asylum opening in the grounds in 1870.

Netley played a major role in the origin of the military nursing service. The nursing heroine of the Crimea, Florence Nightingale, founded a training school here for military nurses. The site also became the home of the Army Medical School, with military doctors training near the nurses. Some of the trainees would be sent to war zones overseas. In 1879, six sisters, known as 'Netleys', were sent to tend the wounded of the Zulu War. Some nurses and Army Schoolmistresses are found in the burial collections, as are women from nearby Netley Abbey, and the female family members of serving soldiers.

During the First World War, Netley retained a prominent role in caring for the sick and injured. Not only was it a major base for military nurses, including members of the Queen Alexandra Imperial Military Nursing Service (QAIMNS), QAIMNS Reserve, Voluntary Aid Detachments (VADs), and Territorial Army Nursing Service (TANS), but it was a pioneering centre for the treatment of shell shock. In 1914, a Welsh Hospital was established in the north of the grounds to treat military personnel from Wales. Among those treated here for shell shock was the poet Wilfred Owen.

Second World War patients included soldiers evacuated from Dunkirk in 1940, former Prisoners of War (Europe) and amputees. Between 1944 and July 1945, the United States Military (Army and Navy) ran the hospital, treating survivors of D-Day and German Prisoners of War.

Netley's burial records on Deceased Online cover 1864 to 1975. Including in the collection are soldiers from across the British Empire. The image below is an extract from the burial register for October 1915. It shows 26 year old Raymond Cresswell, who was serving with the Canterbury Regiment of the New Zealand Expeditionary Force. At the top of this extract is an entry for 'British Soldier Name Unknown' who was later identified as Private F. R. Morris of the 7th Lincolnshire Regiment. 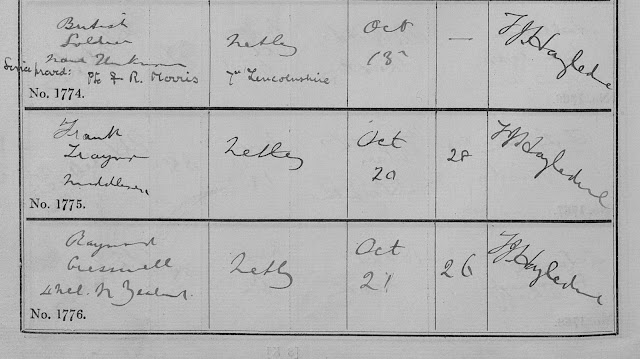 To help you follow up on burial findings in the database, take a look at this useful guide from The National Archives on tracing births, marriages and deaths: http://www.nationalarchives.gov.uk/records/looking-for-person/birthmarriagedeathenglandwales.htm

As always, if you have found any of your ancestors in our records or have anything interesting to tell us about the institutions featured in the collections on the database, please leave a comment in the box below or contact us via our Facebook and Twitter pages.