New data for Scotland will be appearing on Deceased Online over the next couple of weeks. Here we give you an insight into our holdings on the cemeteries of Aberdeen.

We have just added detailed grave location maps of Spitak (aka St Peter’s) Churchyard and St Peter’s Cemetery. Located in the north of the city, these two cemeteries form one vast graveyard. The Deceased Online database contains registers, which date from 1767, for over 160,000 burials. Besides the registers are the Dues Books. For the earliest dates these cover the date of burial, name occupation, age and dues paid.

The Churchyard (or Kirkyard), also known as Spital Churchyard, was open from January 1767 to 29 December 1894. After this closed to burials, the connected St Peter's Churchyard was opened. Burials took place there until 23 April 1951. The cemetery and neighbouring long Spital road are named after the medieval St Peter's Hospital, which no longer remains.

A unique feature of these maps is that they are section maps, showing the section of the cemetery where a grave is located as well as the grave reference and general maps. There are four sections: the Churchyard, the Cemetery, the South Division (opened 1874) and the West Division (opened 1884). As the sections within the cemetery are small, it makes it much easier to locate graves. For anyone planning to visit an ancestor's grave at St Peter's, these maps should prove invaluable.

Within St Peter's there are a number of notable burials and memorials, including members of the Bruce Baronetcy and a large mausoleum dedicated to the Moir family of Scotstown. According to Mr. William Brodie's Aberdeen, Its Traditions and History p. 26, "the site of the Mausoleum of the Moirs of Scotstown in St. Peter's Cemetery in Old Aberdeen, was formerly the site of the chapel that formed part of the hospital buildings, founded by Matthew Kyninmonde, Bishop of Aberdeen, about the year 1197."

The following map shows the grave location of Alexander Jolly, who was buried in St Peter’s on the 1st February 1830. 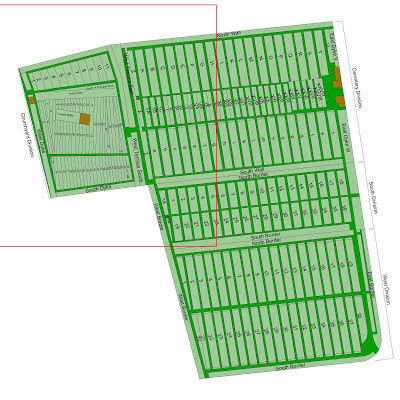 Look out for more Scottish material over the next few weeks, including full records from two historic burial grounds and further data from the Scottish Memorial Inscription (SMI) project.

As usual, do let us know if you have found any ancestors in the Aberdeen records. We love to read your tweets, facebook posts and blog comments!