In a joint project with Scottish Monumental Inscriptions (SMI) we have uploaded monumental inscriptions together with photographs (of headstones dating back to 1632) for 13 cemeteries and burial grounds as indicated below:

The transcripts and photographs have been made available to search online for the first time, as part of the Deceased Online national database of burials and cremations. You can read more about the SMI data on the website here

In addition, images and inscriptions of the headstones and other memorials for Kildalton on the stunningly beautiful isle of Islay in the Inner Hebrides and Roshven Burial Ground on the Morven Peninsula in Highland, are now available.

There are around a hundred names in this new data for Kildalton. Although there are no burial registers, the details do include photographs as well as memorial inscriptions. The Kildalton records date back to 1830 but this wonderful cemetery has much older associations and is of historic national importance. 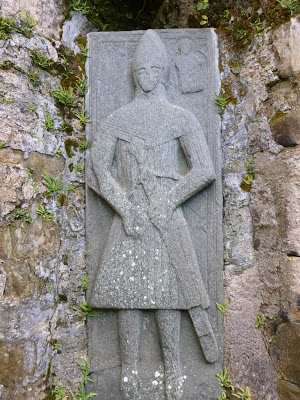 The parish is believed to be named after one of the stepsons of the Macdonalds, the family who ruled the island in the Middle Ages. The power of the MacDonalds was tempered by John Mclan (or MacLan) of Ardnamurchan who captured John Mor MacDonald (executed 1499) on behalf of the King James IV. John Maclan's great grandson is buried at Kildalton under a stone bearing an effigy of him in his armour.

The SMI collections dataset now totals around 100 cemeteries, kirkyards and burial grounds with the oldest records dating back to the 1530s. Deceased Online also has more comprehensive burial details for 86 cemeteries, all of which include burial registers and grave details and many also have cemetery maps. Our records cover most of the old counties of Scotland and altogether, there are around one and a quarter million names in our Scottish records.
If you have Scottish ancestry, do check back over the next few months, as we shall be doubling the data to almost 400 grave inscriptions and other records. We’ll keep you posted on this blog, our newsletter, and on the Facebook and Twitter pages.
Sources:
http://homepages.rootsweb.ancestry.com/~steve/islay/rawdata/islayfamilies.htm