October 16, 2014
Deceased Online is excited to launch an important collection for the significant English Midlands city of Nottingham. The city has a rich history stretching from the legendary Robin Hood to lacemakers and a pioneering chain of pharmacies.
This latest collection of burial and cremation records, dating back to the 19th century, has been digitized in partnership with Nottingham City Council. This week, the first phase of the collection sees records from the following cemeteries and crematorium uploaded to the database:

The collection covers a wide range of records, such as details of those in each grave, cemetery section/ ashes scattering maps, and, of course, scans of the burial and cremation registers. The registers of the Nottingham Collection include names, ages, places of death, date of burial, and details of the grave and by whom the ceremony was performed. This example below is taken from the Northern Cemetery (Bulwell).
The city of Nottingham has a fascinating history which is reflected today in its architecture, castle, museums and heritage centres. Locals are particularly proud of what is alleged to be the oldest inn in England - Ye Olde Trip to Jerusalem - which nestles in the castle's walls. The legacy of Nottingham's industry is also notable. The city was central to the imperial lace trade in the 19th and early 20th centuries, with striking Victorian warehouses still standing in the Lace Market area of the city today. Pharmacy chain, Boots, began life in 1849 when agricultural worker, John Boot (1815-1860), moved to the city to open a herbalist shop in Goose Lane. Unable to afford the cost of doctors in this pre-NHS era, Nottingham's poor workers were quick to appreciate the cheap medicines sold by John Boot. After John's death, his younger son, Jesse, took over the business, developing the name, Boots, to the nationwide brand we know today. Another significant brand is Raleigh, whose bicycle company is no longer based in the city but whose products continue to be bought and sold across the globe. 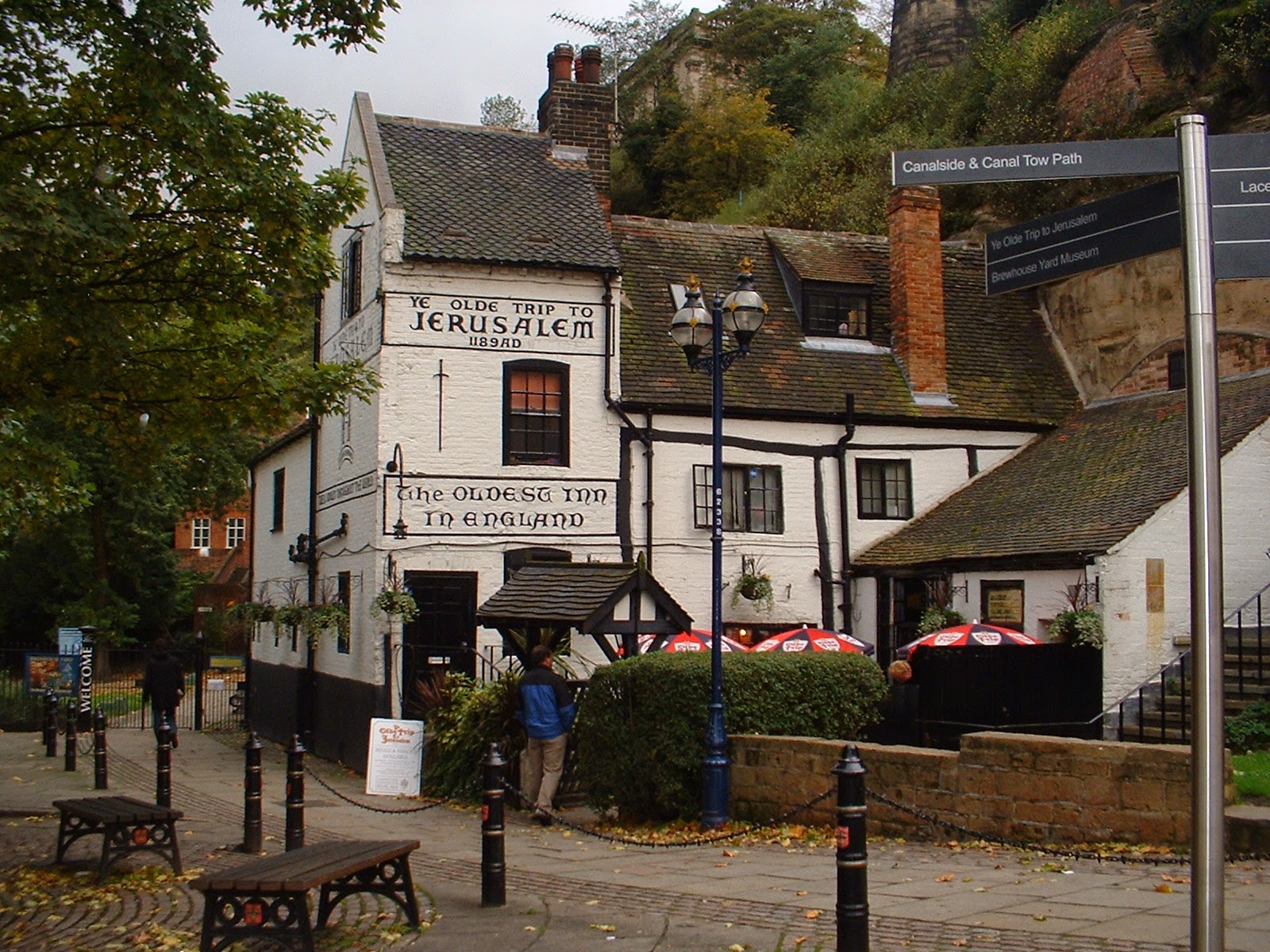 The author, D. H. Lawrence (1885-1930), was born in Eastwood, a mining district about nine miles from the city centre. He set two of his best-loved novels, The Rainbow and Sons and Lovers, in the city, depicting early twentieth century life and speech in the local Nottinghamshire dialect.
One of the oldest events in Nottingham is the annual Goose Fair, which dates from the 13th century. If you have ancestors who lived in the city, they are likely to have attended at some time. The Goose Fair was originally held in the centre of Nottingham, but moved to the Forest Recreation Ground in 1928. Although the fair began as a large market, it is now better known for its fairground attractions. One other notable aspect is the local food. Mushy peas with mint sauce and the sugary "cocks on sticks" have been sold at the fair for over a century.

To find out more about Nottingham's history, take a look at the Nottingham Hidden History Team blog. I shall be exploring further aspects of the city's past in future blogs, when the next phases of the registers collection are uploaded to Deceased Online.

And don't forget that Deceased Online database also contains  burial and cremation records for nearby authorities including Newark, Corby and Kettering, and Gainsborough in Lincolnshire. We also hold records of the Broad Marsh and Holy Trinity grounds of Nottingham city, which form part of The National Archives Collection. If you're researching ancestors in the East Midlands, do check back just before Christmas when we'll be adding a new collection to the database for another local city with a Robin Hood connection . . .

We would love to hear from anyone who has found an ancestor in the Nottingham records. Do let us know a little about your ancestor and his or her connection to Nottingham. Get in touch with us via the Comments Box below or via our Facebook and Twitter pages!

January 10, 2020
This week, I focus on one of the cemeteries featured in our  new collection from the historic industrial city of Salford (now in Greater Manchester) Above: The Victorian mortuary chapel clocktower at Agecroft Cemetery Agecroft Cemetery and Crematorium is situated in the Pendlebury area of Salford. Opened in 1903 in response to overcrowding at nearby Weaste Cemetery, Agecroft covers 45 acres. The cemetery originally had three chapels, Church of England, Roman Catholic, and nonconformist. The Catholic chapel was pulled down, and in 1957, the former nonconformist chapel building was converted  into a crematorium . On the left is a photograph of the disused Victorian mortuary chapel clocktower. This has been listed by the Victorian Society. I will be exploring Salford in the Second World War in detail next week. However, visitors to Agecroft should look out for the stone memorial to the seven-man crew of Lancaster bomber PB304. The aeroplane crashed in Regatta Street, Agecro
Post a comment
Read more