Woolwich Cemetery in the Royal Borough of Greenwich


Now that all 485, 000 cemetery records from the Royal Borough of Greenwich are available on the database, this week’s post examines the history behind the Princess Alice Memorial in Woolwich Cemetery. This towering cross was built in memory of those who lost their lives in the sinking of the saloon steamer, the Princess Alice, which took place on the River Thames on Tuesday 3 September 1878, just south of North Woolwich. 120 of the alleged 640 victims are buried in rows behind the cross.

Today, few have heard of the Princess Alice disaster, but throughout September 1878, details of the tragedy and its aftermath dominated newspaper coverage across the UK.

The Princess Alice was one of the largest saloon steamers of the London Steam Packet Company, and could carry up to 700 passengers. Tuesday 3 September was a fine day, and the sunshine tempted many from across London to spend the day enjoying the weather in Kent. The steamer set off from the city at about ten o’clock, headed for Gravesend and Sheerness. Several of those aboard spent the day at Rosherville Gardens in Gravesend, one of the largest and most popular of the pleasure gardens of the period.

After collecting her passengers from Gravesend at around 6pm, the steamer embarked for London. Not quite two hours later, she arrived within sight of the Royal Arsenal at Woolwich, just off Tripcock Point. It was then that the Bywell Castle, a large iron screw steamer, was spied heading towards the Princess Alice. Suddenly, the passengers became aware that their vessel had been hit. William Alexander Law, the second steward, gave a statement saying:

I heard a crash. It was not very heavy the first time . . . immediately there was another crash. I ran upon deck, and amid the confusion and screams of the passengers, I heard the water rushing in below . . . I, being a strong swimmer, jumped overboard and swam to the shore . . .[1]

Immediately the pleasure boat began to sink. Some passengers managed to escape onto the Bywell Castle, but most were left to struggle in the water as the Princess Alice sank: “and within five minutes of the fatal blow she heeled completely over and sunk in the deep water.”[2] 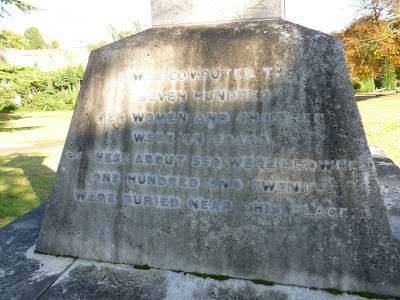 Fellow passengers and crew from other boats on the river heroically tried to save as many lives as they could from the dark cold and sewage-ridden water. Once ashore, the surviving passengers, some “half-naked”, were assisted by “Doctors, police, parish officials, and others . . .”[3] Meanwhile, “the whole population of Woolwich seemed congregated in the streets about the waterside” eager to spot further survivors.

The tragedy of the sinking quickly became apparent, with newspapers reporting that over 500 lives had been lost. The personal tragedies were also reported: the young woman sent to live in the workhouse after having her baby was swept from her arms, and whose husband and three other children also died; the superintendent of the company, Mr. Towse, whose wife, three children, nurse and governess all died; and Miss Palmer who had no money to travel to Woolwich to identify the bodies of her father, mother, two sisters and brother. There were hundreds more. The final death toll is now believed to be closer to 640.

Usefully, for family historians, many newspapers at the time reported names, addresses and ages of the survivors. If your ancestors lived in London at the time, it is worth checking if one was aboard the steamer on that fateful day. Survivors came from as far afield as Stoke Newington, Bloomsbury, Clerkenwell, East Dulwich, Staines and Plumstead.

A full table of details of passengers, crew and others involved can be read at http://www.alsbury.co.uk/princessalice/alice0.htm

On 5 September, the Bristol Mercury reported that “the captain, William Grinstead, and all, or nearly all, the remainder of his crew are among the lost.” The 47 year old Captain, William Robert Hattridge Grinsted, came into some criticism after the event. It appears Grinsted confused the intentions of the oncoming vessel, ordering the helmsman to turn the Princess Alice straight into her path. Sadly, he and hundreds of others paid for this mistake with their lives. Grinsted is buried at Woolwich in an unremarkable grave.

Were any of your ancestors involved in the Princess Alice disaster? Let us know by leaving a comment below, send us a tweet or write on our Facebook wall. We love to hear from you!
[1] The Bristol Mercury and Daily Post (Bristol, England), Thursday, September 5, 1878
[2] ibid
[3] ibid