This week we mark the completion of the digitization of the records of Manor Park Cemetery and Crematorium
All 430,000 burial and cremation records for Manor Park in East London are now online and available to search on the Deceased Online database.

This week we added burial records from 25 March 1875 to 15 December 1898. These records include scans of the burial registers, as well as maps of the grave sections and details of the occupants of each grave.

This twenty-five year period saw around 160,000 burials, many due to a continually increasing population and the extreme levels of poverty in London’s East End. Amongst the dead were thousands of children, including young infants. The page below, from the burial register of August 1889, shows the burial details of ten children. One was only 36 hours old at the time of death. 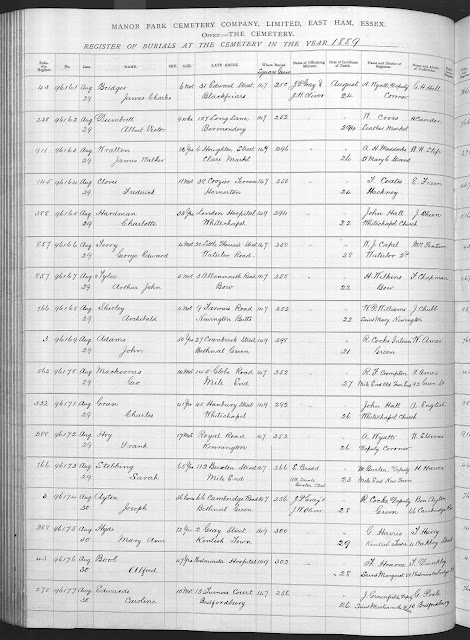 This close-up of the same page gives the name, age, address and burial plot of three babies who are buried in the cemetery. The first two, George Edward Terry and Arthur John Tylee, are buried together in a common grave. The addresses give an indication of how far some of those buried lived from the cemetery. Archibald Shirley, for example, lived at 9 Farmer's Road, Newington Butts at the time of his death. This is around ten miles away from Manor Park. Farmer's Road is today in the London borough of Southwark.

In 1889, the same year as these children's deaths, the first edition of Charles Booth's poverty maps of London was published. The first sheet from these describes the East End, and was published separately in Booth's Labour and Life of the People. Volume 1: East London (London: Macmillan, 1889). In the work, Booth discusses infant mortality in this part of London:

These and many other instances have inclined me to

connect the rate of infant mortality with the irregularity
of employment of the father. Amongst this class the
mortality is enormous. The mothers discuss the
number they have buried with a callousness amounting
at times almost to pride in the vastness of their maternal
experience.(p. 474)

Booth looks in detail at the employment of dock labourers, some of whom lived in the Forest Gate area, where Manor Park Cemetery is situated:

neighbourhood of the docks. They are scattered far and
wide, in Forest Gate, Hackney, Upton, and other outlying
districts ; the regularity of their wage enabling them to live
in a small house rented at the same figure as one room in
Central London. (p. 196)

But he retains a special sympathy for married women, and their grim relationship with mortality:

nothing more than procrastination of death. They bear
children and bury them. Their minds have been starved
and their senses dulled. "Abandon hope, all ye who enter
here" might well be inscribed above the entrance to the Red
Church. For these women but little can be done. The position
of the married woman can only be affected through the
better education of the child, the training of the girl, and
through everything that tends to raise the man morally
and industrially.(p. 461)

Ironically, Booth highlights the grandeur of the Victorian funeral and its growing importance to local inhabitants at this time: "Next to births, the commonest events to the factory girl are funerals; and she enjoys few things so much as taking part in a funeral procession."

Between 1875 and 1898, the streets of the East End would regularly be filled with the sights and sounds of funeral processions. And, of these, most would be heading for Manor Park Cemetery.