February 05, 2014
This week we have a guest post by Ann Treneman, parliamentary sketch writer for The Times.  Ann is the author of an excellent new book, Finding the Plot - 100 graves to visit before you die.

Ann Treneman has been the parliamentary sketch writer for The Times for ten years, winning multiple awards. Before that she was a feature writer for The Times, winning the British Press Award Feature Writer of the Year in 2000. She has also worked for The Independent and The Observer where she was foreign editor. Born in America, she has lived in Britain for the past 30 years. 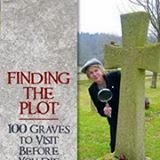 Ann's latest book, Finding the Plot: 100 Graves to Visit Before You Die, was published in autumn 2013.  Like us, Ann has a passion for cemeteries and memorials, their history and the stories associated with them and as an entertaining writer, she brings them back to life.  The book features many graves and burials which appear on the Deceased Online website. These include Mary Hogarth, Sir John Soane, Ossie Clark, Emmeline Pankhurst, Cora Crippen and Rachel Beer. There are a further eleven graves which will feature in forthcoming releases. 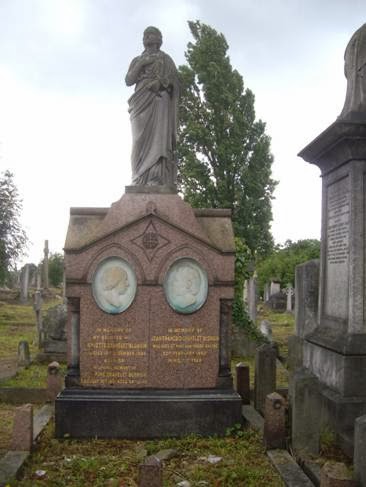 The above image shows the tomb of the amazing Emile Blondin in Kensal Green Cemetery. Blondin's burial entry can be found in Deceased Online's recent release of records from the cemetery.

Ann told us, "The thing about graveyards is that you never know who you are going to meet there. I had never heard of the man named Blondin until I saw his name on a gravestone at Kensal Green Cemetery. Indeed I had never encountered the word “funambulist” before I started doing research into his life. But from the moment I began to learn about this man, the first to walk on a tight-rope over Niagara Falls, I was fascinated. He was amazing, not only for his physical prowess and feats (or should that be feets?) but also for the sheer panache with which he lived his life. I just knew that I had to include him in my book Finding the Plot: 100 Graves to Visit Before You Die. Below, then, is the extract on Blondin (original name Jean Francois Gravelet) from my book. I was also more than a little pleased to find his name in the records now available on deceasedonline.com."

The following extract is taken from Finding the Plot: 100 Graves to Visit Before You Die by Ann Treneman.


Funambulist isn’t a word you hear every day though surely it should be, for it means tightrope-walker. The greatest funambulist of them all lies in Kensal Green Cemetery. His name was Jean François Gravelet, though he performed as ‘Blondin’, and he is buried with both of his wives (no juggling there – the first, Charlotte, died long before the second, Katharine, arrived). It’s a great monument, to be found by the path in square 140 of the cemetery plan: Grade II listed pink Peterhead granite, topped by a tall draped statue of the figure of Hope who sadly, has now lost her anchor.


Blondin’s white portrait in bas-relief, hair abundant, goatee neat, faces that of Charlotte (no goatee). The only clue to what he did was his place of death: Niagara Falls House in Ealing, Blondin invented crossing Niagara on a rope. He did it first in 1859, the rope 50 metres or 160 feet above the water, nearly half a kilometre long and 7.5cm, or 3 inches, in diameter.


Then he did it again, and again, until he’d notched up seventeen goes. He did it while blindfolded, pushing a wheelbarrow, on stilts, feats that made him famous and were watched by huge crowds. Flamboyant, fearless and theatrical, he would stop mid-way to take photographs of the crowd photographing him. He even walked across Niagara while carrying his assistant, Romain Mouton, who must have been quite mad to agree to it. The Prince of Wales was watching, but when asked by Blondin if he could carry him, did the sensible thing.

But the stunt that takes my breath away – not least because it is so French – was when he did it carrying a small stove, stopping mid-way to prepare and cook an omelette, which he then ate. Voilà le petit déjeuner!

Blondin, born in France, worked in America before moving to London. His appetite for funambulising was insatiable, his desire to give his audiences a thrill extending to a stunt at Crystal Palace in which he walked on a tightrope 180 feet above the concrete floor, pushing a wheelbarrow that contained his five-year-old daughter Adele, who dropped rose petals on the audience. Everyone watching was scandalised and the Home Secretary ordered him not to do it again. He didn’t, though I suspect he wanted to.

Oh the spectacle of it all! I am not sure what the modern equivalent would be. This is how Charles Dickens, writing for his weekly, All the Year Round, in June 1861, described going to see Blondin:


"I have just arrived at the Crystal Palace, somewhat ashamed of myself, to see Blondin, the Franco-American rope-dancer, risk his life for my half hour’s amusement. I am with some thousands of others, jostling cravers for the unhallowed excitement, and a great choice of delight lies before me. Shall I sit down in the great transept 100 feet below the rope, which looks as small from there as a perch of a bird-cage, and quietly watch till the hero slips and smashes into a red sop of flesh and at my feet? Or, shall I go up to the first gallery, where I shall actually be able to see him half way in his fall, and behold his death more pleasantly and tranquilly? Or, shall I risk a little more trouble for an exquisite and new sensation, and ascend to the third, or five shilling gallery?


Or, shall I boldly take a gold piece and mount till I can be on a level with the rope of the venturous Icarus and there, watching his lithe and clasping feet, have the felicity of being able for years to lean across the epergne at dinner parties to relate how I was the first to see Blondin’s foot miss its hold, the instant before he fell 100 feet, and was picked up stone dead? I know all this is rather cruel, and I am rather ashamed of myself; but really no one can conceal that we all, thousands of us, have come to see an acrobat perform a feat of imminent danger. For an instant, I feel one of a pack of ten thousand staghounds, who are in full cry and thirsting to lap the blood of one poor fox…"

Dickens needn’t have worried. Blondin outlived him by some years, dying of diabetes at the age of seventy-three, having married his young nurse Katharine two years before. 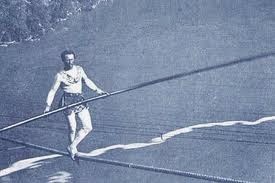 In two weeks time, members of the Blondin Memorial Trust will be meeting at the Kensal Green memorial on the anniversary of his death, 22 February, to toast the great funambulist with a glass of champagne.

Look out next week for details of our competition to win three copies of Ann's new book. We'll keep you updated on our Facebook and Twitter pages. You can read more about Ann's book at https://www.therobsonpress.com/books/finding-the-plot-hardback.