July 22, 2014
The Deceased Online database includes diverse records from church burial registers, urban cemeteries and modern crematoria. In this post I look at the history of cremation in Britain and feature some examples from Deceased Online's collections.

Although the practice of cremating dead bodies was common in Hindu, Jain, Buddhist and Sikh cultures, cremation did not become legal in Britain until 1885. The Queen's Physician, Sir Henry Thompson (1820-1904), helped to form the Cremation Society of Great Britain on 13 January 1874. Thompson, the Society's first President, was concerned about the insanitary nature of urban burial grounds as well as the lengthy and increasingly costly nature of Victorian burials. The Cremation Society set about funding Britain's first crematorium in Woking, Surrey.
Not all Britons embraced the new practice. On 26 December 1878, the Vicar of Woking complained to The Times:

Sir, -I read lately in the Record that, according to the
British Medical Journal, Professor Gorini is at present in
London superintending the erection of a funeral pyre on
a site belonging to the Cremation Society near London.
May I be permitted to state for the information of the
public generally and in the interests of my parishioners
particularly that one such cremation apparatus is at the
present time in course of construction in Woking to the
intense horror and amazement of the inhabitants?

Nonetheless, the will of the Society and its supporters was such that a second crematorium opened in Manchester in 1892. In 1944, the late Archbishop of Canterbury, William Temple (1881-1944), was cremated in Kent, giving a quiet seal of approval from the Established Church, although some denominations continue to prefer burials. By 2000, there were more than 240 crematoria across Britain.

The Deceased Online database has records from crematoria in Scotland, Greenwich, Wakefield, Trafford, Cambridgeshire, London, Kent and Sussex. Some, such as Manor Park Crematorium in East London, share their sites with earlier burial grounds. The earliest cremation records in the database are from the Edinburgh in 1929. Those for the 1930s cover Islington and West London Crematorium in Kensal Green.
One notable entry in Edinburgh's Warriston Crematorium registers is for the Austrian philosopher and psychiatrist, Alfred Adler (1870-1937).  Friend of Freud and Jung, Adler is perhaps best known for developing the theory of the "Inferiority Complex". He died in Aberdeen, but the cremation register gives his residence at time of death as 100 West 58th Street, New York City.

The ashes of those recorded in the database are not always located in the crematorium. Often, loved ones choose to scatter or bury the ashes in a numbered plot onsite, but others, such as Ingrid Bergman (1915-1982), have their ashes relocated to places of significance in their life. Some crematoria, such as Warriston, include a column in the register for "How Ashes Were Disposed Of". 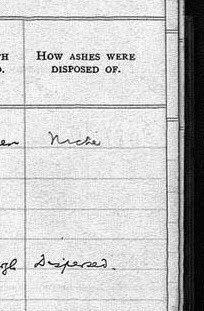 Following this overview of the history of British cremations, in future posts I shall be looking more closely at individual crematoria, how their records are presented and how your ancestors may be commemorated. If you haven't yet found your ancestor's record, do note that Deceased Online will be adding more crematoria records to the database over the coming year. Watch this space for further updates!


Have you come across any notable or unusual cremation entries in the database? Please share your comments in the box below, or via our Facebook and Twitter pages. We love to hear from you!