April 14, 2015
We're counting down the days to the opening of Who Do You Think You Are? Live 2015 on Thursday in Birmingham. Also this week, to celebrate the event's first outing to the West Midlands, Deceased Online is pleased to be uploading records for local council of Sandwell.

Once again Deceased Online will be be demonstrating collections and meeting database users at the annual WDYTYA? Live show. We're at Stand Number 406. This year's event takes place at Birmingham's NEC from the 16th to the 18th of April, and is packed with the usual features, such as Ask The Experts, workshops and talks, celebrity guests, heirloom detective, photograph dating, the Society of Genealogists' Family History Show and the Military Checkpoint.

I'm particularly pleased that the show is being held in Birmingham this year as it gives me a chance to re-visit the land of my maternal ancestors. My mother grew up near Birmingham, in the Black Country, and my great uncle was a celebrated Black Country poet. Below is a photograph of my grandmother (on the right) with her mother and one of her sisters out shopping in Birmingham circa 1930. I love their coats in this picture! 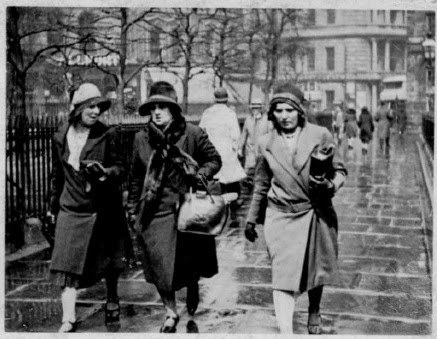 This week, Deceased Online will be adding four sites from the records of Sandwell Metropolitan Borough Council. Sandwell is in the heart of the Black Country, bordering the City of Birmingham, Wolverhampton, Dudley and Walsall. The area is named after a 12th century Benedictine Priory and covers the towns of Oldbury, Rowley Regis, Smethwick, Tipton, Wednesbury and West Bromwich. Confusingly for family historians, as the West Midlands is an area tightly packed with small towns, it is likely that one part of a family lived in one borough and another in the neighbouring borough. My ancestors criss-crossed between the modern boroughs of Sandwell, Dudley, City of Birmingham, Wolverhampton and Walsall without a seconds thought for how hard it would be for their descendant to trace them many years later! It is in cases like this that online records can be of great help.

If, like me, you have ancestors from this region they are likely to have worked in industrial occupations, such as mining, nail making, brick making, steel, and iron moulding. Industrial workers needed food, healthcare and education, and the infrastructure ensured there were plenty of opportunities also for doctors, lawyers, journalists, teachers, and shopworkers. My great grandmother, Emmie Harrison (1883-1968), pictured above, ran three shops in Tipton from the early to mid 20th century.
The cemeteries going live on the Deceased Online database this week are:

As my grandmother was born in Tipton, I was very keen to see if I could find any relatives in the collection. Grandma grew up in Tipton but when she married she moved around the corner to Coseley - now in the borough of Dudley. My great grandmother and father were very poor in the early years of their marriage. My great grandfather, John Anthony Harrison (1881-1940), was often ill with rheumatoid arthritis, leaving his wife to run their shop business while giving birth to, and raising, ten children.

In the early years, three of their children died young. A few years ago I visited the area and searched in the local church yard of Christ Church, Coseley for some of the family graves. I found this grave, with stones broken and covered in weeds. 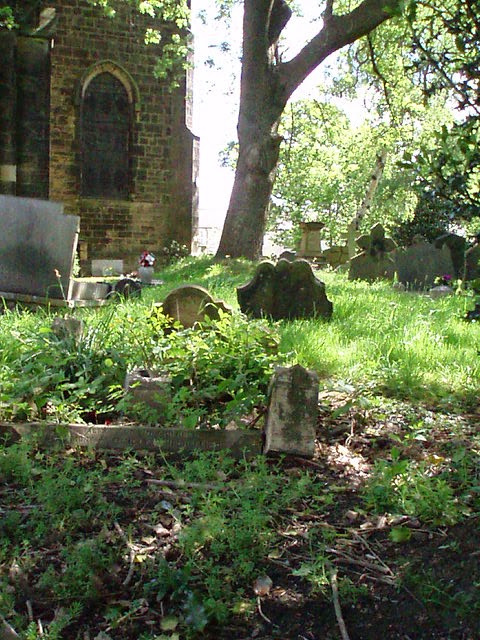 There was writing on all four sides of the stone. It lies in memory of Grandma's three young sisters, Lily Maud Harrison (1908-1909), Florence M Harrison (1918-1918) and Zelia Blanche Harrison (1919-1923). When their mother had made enough money from her retail business, she dedicated this stone. On the side shown below is engraved: "IN LOVING MEMORY OF THE CHILDREN ON JOHN ANTHONY AND EMMIE GERTRUDE HARRISON". 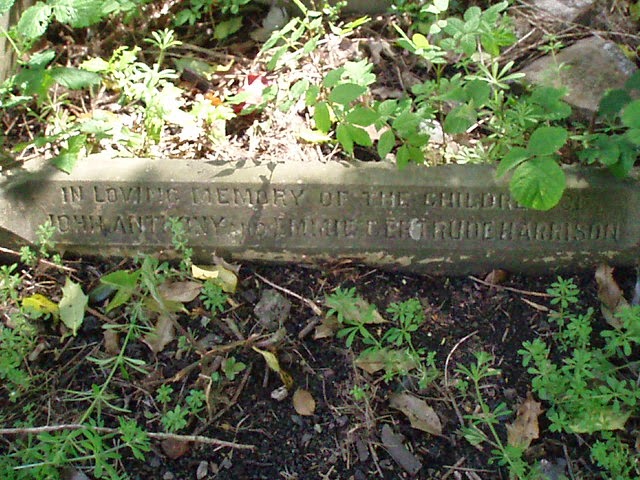 Although the stone marks their memory, and the love the parents had for their daughters, Lily Maud was not buried in the churchyard. As they had been living around the corner in Tipton at the date of her deaths, Lily Maud was buried in Tipton Cemetery. I searched the Deceased Online database and found her entry. As I imagined, the little girl was buried in a pauper's grave, sharing her resting place with unrelated corpses. The family had been too poor at the time to give her a full burial and headstone.


My husband's CAUSER family come from West Bromwich. Searching on the database for the Heath Lane Cemetery records, I quickly discovered the burial entry for his Great Uncle Ambrose who died in 1960. Also in the grave is Ambrose's sister, Ada, who had died at 6 years old in 1897. A surprise, though, was the discovery that also in the grave was a 3 month old "Ernest Causer".


The only Ernest we knew was my husband's grandfather, Joseph Ernest Causer, known as Ernie, who was born in 1898. The Ernest in the grave was buried 13 December 1896. From the 1911 census, we know that Ambrose and Ernie's mother, Mary Ann, had 15 children, 5 having died by that date. So far, only 13 have been identified. The family lived for over 100 years in Witton Lane, West Bromwich. This is the address given on the right of the burial register entry for baby Ernest, shown above, suggesting that this may be one of my husband's great uncles.

We will need to order a birth certificate or check baptism records to confirm, but it seems that, thanks to Deceased Online, we have been able to identify one of the 2 missing children from my husband's family. This shows that when searching through birth records of a missing unnamed child can be too expensive, checking for burial records can prove fruitful.


Deceased Online will complete the Sandwell Collection over coming weeks. The remaining sites, are:

The records include register scans, computerised register records (from the 2000's, dates vary by site), grave details indicating all those buried within each grave, maps indicating the section of a
cemetery where graves are located or where ashes were scattered.

As always, we love to hear from you! If you are attending WDYTYA? LIVE, please come over to our stand 406 and say hello. If you can't make the show but would like to share some of your family's West Midlands history, please write in the Comments Box below, or on our Twitter and Facebook pages.