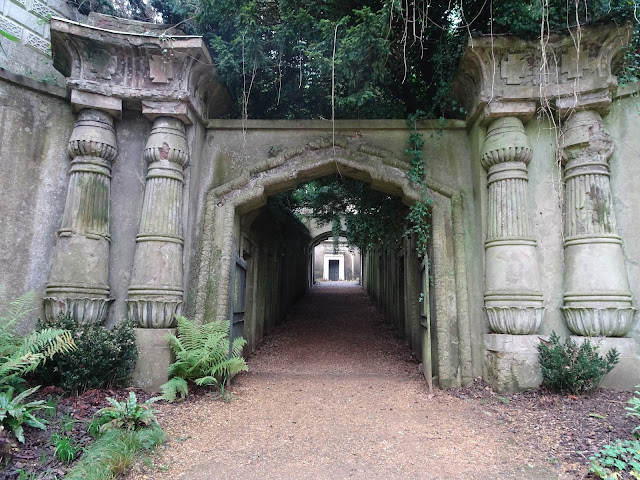 We are very excited to announce the release of records for Highgate Cemetery, one of London’s 'Magnificent Seven'. A total of 160,000 records have been uploaded to the database of this significant collection, which dates from 1839 to 2010. They include coverage of the first three decades: 1840 to the early 1870s, with a gap in the records from 1863 to 1865.

Highgate’s original burial registers are held at the cemetery itself and at Camden Local Studies and Archives Centre in Holborn but are available online only through Deceased Online.

History
Like the other ‘Magnificent Seven’ cemeteries, Highgate Cemetery is world-renowned, contains hundreds of notable burials, has several listed monuments, and provides a haven to inner-city wildlife. EnglishHeritage has designated the cemetery as a Grade I park. Highgate is the third oldest of these cemeteries, opened in 1839 by the Bishop of London, two years after Victoria ascended the throne. Victorians needed these cemeteries as, by 1832, the burial grounds of London had become overcrowded and insanitary. Parliament responded to the crisis by passing bills, allowing the creation of commercial cemeteries in what were then the more rural suburbs of the city. Private cemetery companies were created which went on to build the following cemeteries over the next nine years:

The records for Kensal Green, Nunhead, Brompton (including the first set of records), and now Highgate, can all be exclusively searched on Deceased Online. And a fifth's cemetery's records will be added to Deceased Online in 2017.

The London Cemetery Company, created in 1836, planned Highgate Cemetery’s layout on seventeen acres of the former Ashurst Estate by Highgate Village. The areas lies on a steep hillside, facing the centre of London, and winding down Swain’s Lane past Waterlow Park towards Hampstead Heath, Dartmouth Park and Kentish Town. Garden designer, David Ramsey, created exotic, formal planting. Stephen Geary, the architect, and surveyor, James Bunstone Bunning designed the stunning monuments and chapels of what soon became London’s most fashionable cemetery. Perhaps the most unique aspect of this is the celebrated Egyptian Avenue, a walkway bordered by sixteen vaults that leads to the Circle of Lebanon, created by earth taken from around an ancient Cedar of Lebanon. Close by the Terrace Catacombs was built in 1842. Along with seventy other monuments, these gothic wonders have all been listed by English Heritage.

Like the other Magnificent Seven cemeteries, Highgate is associated with nonconformist burials. Initially, 15 acres were consecrated for Anglicans while 2 acres were allocated for dissenters. There is one Church of England chapel and another for Dissenters. The first burial took place on 26 May 1839 of Elizabeth Jackson, a resident of Soho. In 1854 the area to the east of the original area across Swains Lane was bought to form the eastern part of the cemetery. This part is still used today for burials, as is the western part. Most of the open unfrosted area in the new addition still has fairly few graves on it.

I shall explore some of these lives in more detail in my next blogs.

The Commonwealth War Graves Commission maintains 257 First World War and 59 Second World War graves here. The names of other service personnel from across the Commonwealth whose graves could not be marked by headstones are listed on a Screen Wall near the Cross of Sacrifice in the West Cemetery. Other notable military graves are those of Robert Grant VC (1837-1874) and that of Edward Richard Woodham (1831-1886), one of the few survivors of the Charge of the Light Brigade [another survivor features in Deceased Online's Stapenhill Collection].
Summary
The records available now on Deceased Online include digital scans of original registers, grave details indicating all those buried in each grave, and section location maps for graves (unfortunately, maps for a few graves are not available).
Highgate Cemetery is managed by Friends of Highgate Cemetery Trust, a not for profit organisation which depends on any revenue generated through visitors to the Cemetery and other sales including records now online. However, please note: restricted access! Avoid a wasted journey: Highgate Cemetery West is closed to the public. You cannot visit a grave without an appointment. See www.highgatecemetery.org/visit/searches.
Finding graves in the open East part of the cemetery is also very difficult. Please either read further notes on the Deceased Online website about Highgate Cemetery or visit the Cemetery's website www.highgatecemetery.org for all the cemetery rules.
There are now records for four of London's Magnificent Seven cemeteries available exclusively on Deceased Online; the others being Brompton, Kensal Green and Nunhead. Across London, we have nearly 5 million burial and cremation records for 54 cemeteries and 4 crematoria available on Deceased Online.
In next week’s blog I shall be exploring the history of Highgate Cemetery through the Victorian era and highlighting some of the most notable interments of that period. In the meantime, if any of your ancestors were buried in Highgate, please do let us know. There are a many common graves in the cemetery, and we would love to hear about the lives any of the lesser-known residents. Do get in touch via the Comments Box below, or on our Facebook or Twitter pages!