February 15, 2017
In honour of Valentine's Day, this week's blog looks at some of the most romantic stories and headstones in the Deceased Online collections marking the everlasting love of couples reunited after death. 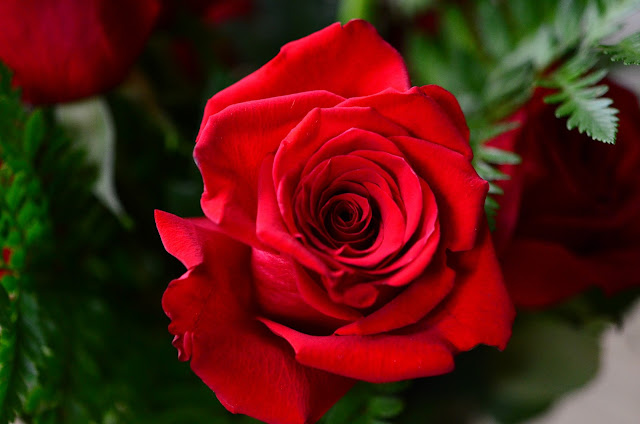 While Valentine's Day is a fun celebration of love and romance for some, for others it can be a harsh reminder of loneliness or the loss of a loved one. Like birthdays, anniversaries and religious festivals, Valentine's Day triggers thoughts and memories of happy times with someone who is no longer here.

When I visit graveyards, however, I am often struck by how much love continues after death. This may be the love of a parent, child, spouse, lover, sibling or friend. In some cases, a spouse's body may be removed from a grave or cemetery and relocated elsewhere in order to join their loved one in death. One romantic example of this is the story of painter and illustrator, Sophia Peabody Hawthorne (1809-1871), whose burial record in London's Kensal Green Cemetery can be found in the Deceased Online database. Sophia's husband, author of The Scarlet Letter among other works, Nathaniel Hawthorne (1804-1864), died in Plymouth, Massachusetts and was buried in nearby Concord at the "Author's Ridge" in Sleepy Hollow Cemetery. The couple had been extremely close, with Sophia providing a strong influence on her husband's work. Four years later, Sophia and her children moved to England. Three years after that, Sophia became ill with typhoid pneumonia. She died on 26 February 1871 and was buried in Kensal Green on the 4th March. Six years later, Sophia and Nathaniel's daughter, Una, died in London at the age of 33 and was buried in the same grave.

Una's sister, Rose Hawthorne, founded a Roman Catholic order of nuns, the Dominican Sisters of Hawthorne. They were responsible for the London grave, which fell, damaging its markers. At this stage, the nuns decided to discontinue caring for the grave in Kensal Green, and to remove the bodies to Massachusetts. In 2006, Sophia and her daughter were reunited with Nathaniel when their remains were buried in a neighbouring plot in Sleepy Hollow.

It is not just famous married couples whose relationships and love for each other can be found in cemeteries. There are also many lesser-known lovers whose feelings are clearly inscribed on their headstones. This book-shaped memorial (above and below) to A. Charles Eberhardt and his wife, Elsie Maud, lies in Highgate Cemetery. As the inscription reveals, Charles Eberhardt died on the 15th May 1956. Elsie Maud lived on without him until 22nd January 1970 when they were reunited in the grave and the second page of the headstone "book" was completed. Elsie Maud's strong love for her husband can be felt on reading the words, "After 50 years together never forgotten." This memorial ensures that their love continues to be remembered today. 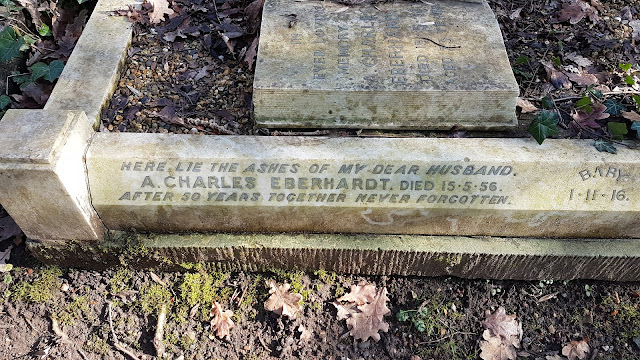 Other interesting examples from Highgate Cemetery of the strength of married love include the following headstone for James Oliver, who died in 1913, and his wife, Anna, who joined him in 1921. The sole word at the base reads simply,

The Highgate Cemetery tombstone pictured below was erected in loving memory of Ethel Phillips by her husband, Joseph Henry Phillips. Ethel was 81 when she died on 21st October 1969 and Joseph Henry joined her four years later when he was 84. Joseph declared his eternal love for Ethel with the following words inscribed as follows:

MEMORY IS A GOLDEN CHAIN
THAT BINDS UNTIL WE MEET AGAIN.

After Joseph was buried alongside his wife, the headstone was inscribed, 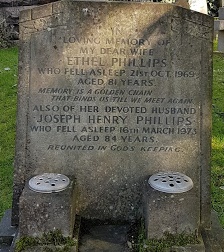 Please share your stories of loved ones in your families who have been reunited in death. Or have you spotted a particularly romantic headstone? We are interested in hearing about any romantic couple, married or not. Write your comments in the box below or get in touch on our Facebook and Twitter pages.