December 07, 2017
This week's post explores the life and family of First World War Victoria Cross hero, Walter Napleton Stone (1891-1917), who was commemorated recently at a special ceremony in Lewisham

Politicians, relatives and local residents gathered in Lewisham High Street on 30 November 2017 to mark the unveiling of a paving stone in the name of former Blackheath resident, Captain Walter Napleton Stone VC.

The paving stone is one of 628 specially commissioned stones which are being laid in the home areas of each of the Victoria Cross recipients of the Great War.

The date of 30 November commemorates the day Walter Stone was killed on the Western Front, at the Battle of Cambrai. Like many killed in action between 1914 and 1918, the grave of Walter Stone has not been found. He is remembered on a number of memorials, including the Cambrai Memorial to the Missing, the parish war memorial Shrewsbury's St Mary's Church, and on the Lewisham Shopping Centre mural.

Although Walter has no known grave, his family remembered him and his brother on a monument among their graves in Greenwich Cemetery. The below screengrab from the Deceased Online database shows the names of all those buried in grave reference C1/4/5064 in Greenwich Cemetery. These include Edward Stone, Walter's father, who died just over a fortnight after the end of the war. The database also reveals that one of Walter's older brothers, Francis Le Strange Stone, survived the war and was buried on 11 October 1938. 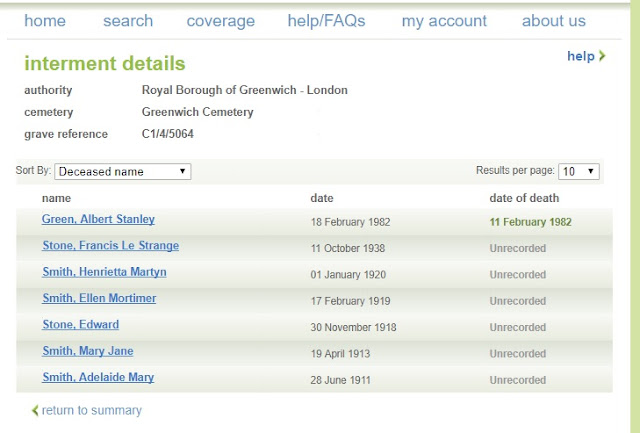 . . . also in memory of Lt Col Arthur Stone DSO, 16th Lanc Fusiliers, second son of the above, killed 2 October 1918 . . . and Capt Walter Napleton Stone VC, 17th Royal Fusiliers, fifth son of the above, killed Bourlon Wood, France, 30 November 1917, presumed buried by the Germans near Moeuvres.
Born on 7 December 1891 in Blackheath, Walter Napleton Stone was the son of Edward and Emily Frances Stone. He was educated at Harrow School and Pembroke College, Cambridge. In 1901, he was recorded on the census with his solicitor father, 52 year old Edward, older brother, Arthur, and sisters, Edith, Dorothy, Phyllis, and Eleanor Stone at 3 Landsdowne Place, Blackheath.
At the time of his death, Walter Napleton Stone was serving as Acting Captain in the 3rd Battalion of the Royal Fusiliers, attached to the 17th (Service) Battalion. His Victoria Cross citation was reported in The London Gazette of 12 February 1918:


For most conspicuous bravery when in command of a company in an isolated
position 1,000 years in front of the main line, and overlooking the enemy's position.
He observed the enemy massing for an attack, and afforded invaluable information
to battalion headquarters. He was ordered to withdraw his company, leaving a
rearguard to cover the withdrawal. The attack developing with unexpected speed,
Capt. Stone sent three platoons back and remained with the rearguard himself. He
stood on the parapet with the telephone under a tremendous bombardment,
observing the enemy and continued to send back valuable information until the
wire was cut by his orders. The rearguard was eventually surrounded
and cut to pieces, and Capt. Stone was seen fighting to the last till he
was shot through the head. The extraordinary coolness of this heroic
officer and the accuracy of his information enabled dispositions to
be made just in time to save the line and avert disaster.

Were you present at the commemoration in Lewisham last week, or do you have a connection to Walter Napleton Stone? Please do get in touch and share your stories with us in the Comments Box below, or on our Facebook and Twitter pages.