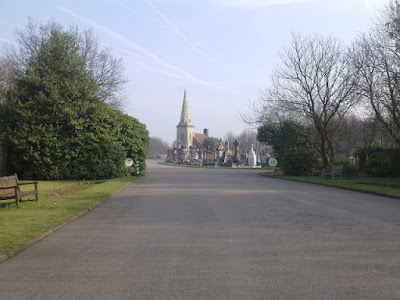 On 17 December 2017, a large crowd, including survivors and officials such as the Mayor of London, attended an unveiling of the Stairway to Heaven Memorial in Bethnal Green. While this recent monument is the only official memorial to the Bethnal Green Tube Disaster, several of the victims are also remembered at their burial places in Manor Park Cemetery and Crematorium, London E7.
The tube disaster is now known to be one of the worst British civilian tragedies of the war. On the night of the 3 March 1943, at 8.15pm, an air siren rang sounded to warn the people of the East End to take shelter. Some sheltered in cages in their homes, but many thousands took the local underground station – an increasingly popular place to hide from the bombs. In the struggle to clamber down the blackout staircase into Bethnal Green tube, a middle-aged woman and her child fell over. Those following tripped and fell, until almost 300 people were crushed on top of each other. 173 of these people (27 men, 84 women and 62 children) were crushed and suffocated to death. Nearly 100 people were injured. By morning, families were wondering why their loved ones had not returned. But news of the disaster was censored for 36 hours. That night, not one bomb fell on Bethnal Green.

Many of the victims were buried in Manor Park Cemetery. The date of their deaths is given in the register as 4 March 1943. Doris David, who was 5 at the time, recalled her narrow escape and the terrible loss of her mother and one of her sisters at the memorial website http://www.stairwaytoheavenmemorial.org/DorisDavid.html Doris’s mother was Mary Ann Hall and her 8 year old sister, Irene, known as Renee. On the burial register (page shown above), they are recorded as ‘Mary Hall’ and ‘Rinie Hall’. The grave details reveal they were buried with 5 other victims of the disaster.
Although the Stairwell to Heaven Memorial is the first to mark the Bethnal Green Tube Disaster, there are two civilian war memorials at Manor Park: one for a school in Leytonstone, and the other for local civilians killed by enemy action. This second memorial was placed by the Mayor of West Ham.
Manor Park Cemetery opened in 1874 and its records can all be searched on the Deceased Online database. Owned by the Manor Park Cemetery Company, which continues to manage the cemetery and crematorium today, Manor Park was then one of the largest graveyards in London. The Company bought the land in 1872 from neighbouring Hamfrith Farm. The cemetery remains a haven for wildlife, with two woodlands, lawns and gardens of remembrance.

If you live in Bethnal Green or have relatives who were living in the East End at the time of the 1943 tube disaster, do let us know via the Comments Box below or on our Facebook and Twitter pages. We love to hear from you!