May 15, 2018
Today marks the International Day of Families 2018. This week's post focuses on the migratory ancestors we encounter in our genealogical research.

The United Nations' (UN)'s International Day of Families has been held annually on May 15th since 1993. The Day demonstrates the UN's belief in the importance of families: "Families remain at the centre of social life ensuring the well-being of their members, educating and socializing children and youth and caring for young and old." For the UN, "family-oriented policies can contribute to  . . . doing away with poverty and hunger, ensuring healthy lives and promoting of well-being for all ages, ensuring educational opportunities throughout the lifespan and achieving gender equality."

Families are, of course, central to family history research. Genealogy searches can be complicated by the division of families as members moved away - sometimes to the other side of the world. Although families did keep in touch by letter (and sometimes through mutual contacts) relatives were not always informed when deaths occurred far from home. Even when the home family did know of a death, this may not have been recorded for posterity. Many family historians, therefore, will have gaps in their trees where a sibling, child or parent seems to have disappeared. No record can be found of them in home records and no document has been found of where they migrated.

Inspired by the international theme of the Day of Families and reflecting on our relatives who were lost overseas, I took a closer look at some of the overseas records in the Deceased Online database.

Most records on Deceased Online come from the UK, but the Military Burial Records Collection from The National Archives in Kew (ref. ADM 6, ADM 73, ADM 305 & WO 156) includes records of deaths overseas in military garrisons in Cyprus, Malta, Egypt and Singapore.

This example (above) is taken from a burial register for Malta's miscellaneous island-wide military burials. The burial recorded at the top of the page on October 4th 1844 is for Benjamin, aged 1 year 4 months, son of Benjamin Glen, Private with the 1st Regiment of the 42nd Royal Highlanders. The entries below are all for children of serving Sergeants of the 42nd. 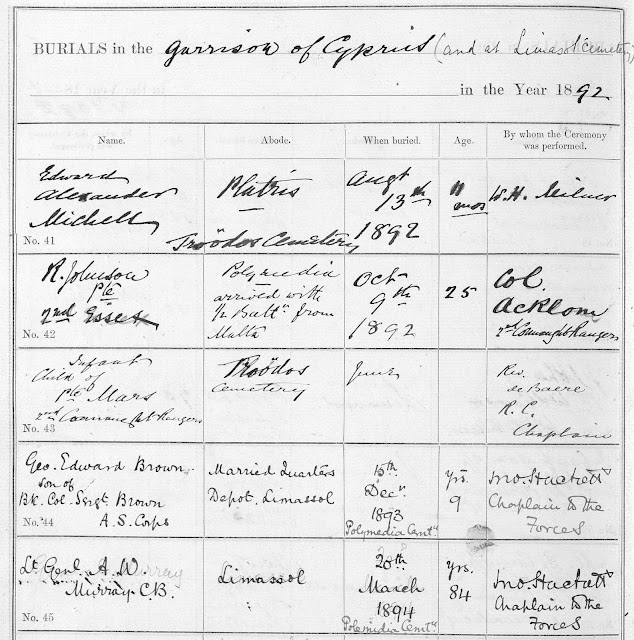 The above page is taken from the burial register of the Military Cemetery, Polemedia [Polemidia] Camp, Cyprus. The first entry dates from 13 August 1892 and is for 11 month old Edward Alexander Michell, who lived at Platris and was buried at Troodos Cemetery. Others recorded on the same page are 25 year old Private, R. Johnston of the 2nd Essex, the "infant child of Private Mars" of the 2nd Connaught Rangers, and 9 year old George Edward Brown, the son of Barrack Colour Sergeant Brown of the Army Supply Corps.

Fortunately, not all deaths in the garrison were of young people. The last entry on this example is for Lieutenant General A. W. Murray C.B., who died at the grand old age of 84 and was buried at Polemidia Cemetery. Augustus William Murray appears to have been at home on the island of Cyprus. His only child, Emily Elizabeth Graham Murray (1849-1924), married Rowland Lyons Nosworthy Michell in Rome in 1877. According to Murray's English probate record, Michell (1847-1931) was the Commissioner of Limassol at the time of his father-in-law's death on 18th March 1894.

While British ancestors were travelling the globe, Britain became home or the last resting place for visitors from overseas. Many came from the Empire, but others moved to provide vital assistance to this country in times of war or to flee persecution from various states in Europe. The above snippet is taken from the Burial Register of Newark Cemetery in Nottinghamshire and shows (on the top line) the burial of 36 year old Squadron Leader Antoni Alexandrewicz. Newark was the base for a number of Polish Air Force squadrons during the Second World War. All 397 of the Polish war graves can be found in Newark Cemetery. Below is a photograph of the memorial cross to fallen Polish airmen. This was unveiled in 1941 by the head of the wartime Polish government in London, President Raczkiewicz. After his death in 1947, Raczkiewicz was buried at the foot of the memorial. 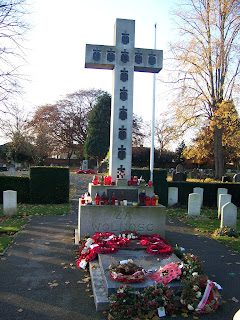 Some Polish airmen were based in Cheshire in the north west of England. The county was also a temporary wartime home to many Commonwealth servicemen and women, 461 of whom were buried at Blacon Cemetery. Opening in 1940, Blacon Cemetery had a specific section for RAF burials. Besides the Commonwealth burials are 97 of other nationalities, of which 96 are Polish. Below is a snippet from the Blacon burial register of 1944 showing, on 23rd June, the burial of Canadian RCAF Sergeant George McCrimmon Anderson.

When thinking of the International Day of Families, it seems appropriate to remember those who died abroad at a very young age, and the parents who lost their beloved children overseas. It also is an opportunity to celebrate the brave, generous and adventurous natures of some of our ancestors and the international ties that they created many decades and centuries ago.

What does the International Day of Families mean to you? Do you have ancestors who lived or died overseas? Please get in touch on our Facebook and Twitter pages. We love to hear from you!