August 09, 2018
Exciting news this week from Deceased Online as almost 50,000 records from the Oxford cemeteries, Botley, Rose Hill and Wolvercote, are uploaded to the database
Deceased Online is delighted to announce that almost 50,000 records from Botley, Rose Hill, and Wolvercote cemeteries in Oxford, from 1894 to 2016, are now available to search on www.deceasedonline.com. Records for the fourth Oxford City Council cemetery, Headington Cemetery, have been digitised and will be released at a future date.

The city of Oxford is celebrated across the world for its universities, academic innovation, and medieval architecture. On television, it is the home of fictional detectives Morse, Lewis, and Hathaway. Its situation in the beautiful county of Oxfordshire, on the banks of the Thames, and close to magnificent Blenheim Palace, all contribute to its reputation as a popular tourist destination for visitors from across the UK and overseas.

The University of Oxford is the oldest university in the English speaking world, with colleges dating from the 13th century. Oxford’s industries include motor manufacture, education, publishing, IT, and science.

Deceased Online's latest set of records comprise digital scans of all burial registers up to 2007 and computerised data from 2007 to 2016, maps showing the section in which the grave is located, and grave details for each of the graves and their occupants.

The burial records include details of those from all walks of life, including academics, celebrated writers, and automobile workers.

One of the most famous names in this latest collection is John Ronald Reuel Tolkien, better known as JRR Tolkien, author of the Lord of the Rings trilogy, philologist, and professor of Anglo-Saxon and English language and literature at Oxford. Tolkien was born 3 January 1892 in South Africa. In 1895, his mother took Tolkien and his brother to England for a visit. Sadly, his father died before he could join them and the family, now without an income, were obliged to stay with relatives. Tolkien was brought up around Birmingham. In 1925, he was appointed Rawlinson and Bosworth Professor of Anglo-Saxon and Fellow of Pembroke College. Later he became one of the Inklings, alongside fellow professor and author, CS Lewis. Renowned as the "father" of modern fantasy literature, JRR Tolkien died on 2 September 1973. He was buried in Wolvercote Cemetery, Banbury Road, Oxford, OX2 8EE.
Also buried at Wolvercote Cemetery is John Richard Charters Symonds (aka Richard Symonds; 2 October 1918 – 15 July 2006). Symonds was an academic and civil servant, who worked hard in humanitarian service in India after the partition from Pakistan and, after contracting typhoid fever, was cared for by his friend Mahatma Gandhi. He worked for the UN for nearly 30 years. Symonds wrote about his relief work in the former colonies, and was a champion of gender equality.

Edward Brooks (11 April 1883 – 26 June 1944), was awarded the Victoria Cross in 1917, and is buried in Rose Hill Cemetery. Sergeant-Major Brooks received his VC after single handedly charging an enemy machine gun, killed one gunner with his revolver and bayonetted another, causing the remaining gun crew to flee. Brooks recovered the gun and brought it back behind Allied lines, preventing many casualties. 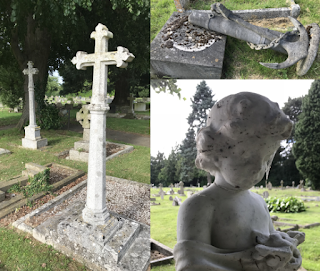 Other local records in the region are available on Deceased Online courtesy of the National Archives for Oxfordshire, Berkshire, and Buckinghamshire.

Do you have ancestors buried in Oxford? Or did your family live in the city at any time? Perhaps, you have relatives who studied there? Whatever your connection, do get in touch via the Comments Box below, or on our Facebook and Twitter pages, to let us know what you think of the latest collection. We love to hear from you!