This week I continue my series on Deceased Online's West Norwood Cemetery Collection with an introduction to the many celebrate individuals buried there after 1900.

As the new century dawned, West Norwood saw the burial of John Lawson Johnston (1839-1900), a meat supplier, who became a millionaire after inventing Bovril, a popular fluid beef extract drink of the late 19th and early 20th centuries. He was buried beneath a large marble monument in the form of a classical portico.

The following year, civil engineer, Richard Henry Brunton (1841-1901), was buried. Brunton designed lighthouses, bridges, roads and harbours in Japan. In honour of this, his new headstone was erected by the Yokohama Chamber of Commerce.

Others buried in West Norwood in the following years include Sir August Friedrich Manns (1825-1907), a musician, conductor and composer, and director of the Crystal Palace Orchestra for almost 50 years; Charles William Alcock (1842-1907), the father of modern sport, founded the FA Cup competition, organised the first Test Matches in England; and John Belcher (1841-1913), an architect. 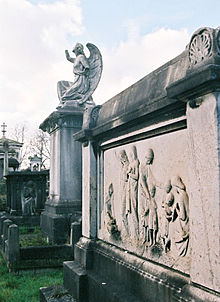 
Maria studied at the Slade School and became an artist’s model, for Pre-Raphaelite painter Sir Edward Burne-Jones, with whom she had a tempestuous affair. The painting above left is 'Maria Zambaco, née Cassavetti, in Cupid and Psyche' by Edward Burne-Jones.

During this period, the cemetery installed a crematorium, and the first cremation took place in 1915.

Paul Cinquevalli (1859-1918) was buried in 1918. He was hailed as the greatest ever juggler seen in the music halls: the ‘human billiard table’, running balls over his back into pockets; juggling balls while carrying in his mouth a man sitting on a chair (see image right).

The Great War ended on 11 November 1911. The following year, Lieutenant Colonel John Cyril Porte (1884-1919), the man particularly associated with the flying boats of the war, died. Long-suffering from overwork, Porte died of pulmonary tuberculosis at just 35 years old. During the war, he had served as Wing Commander in the Royal Naval Air Service, in charge of Felixstowe Naval Air Station, developed flying boats for naval reconnaissance and dropping torpedoes.
Alexander Muirhead (1848-1920), whose burial entry is pictured above, was an electrical engineer, celebrated for inventing duplexing of signals on telegraph cables, worked on the development of wireless telegraphy, and recording the first electrocardiogram.

In 1939, surgeon, theatre owner and WWI Director of Kinema Operations for the War Office, Dr Edmund Distin Maddick (1857-1939) was buried. His large mausoleum of Portland stone is listed Grade II.

The original cemetery lodge was destroyed by bombing in 1944. In 1950, the offices were built. After being war-damaged, the cemetery's Nonconformist Chapel was demolished in 1955.

We're really pleased that so many of you have found ancestors in our West Norwood collection. Do let us know via our Twitter or Facebook pages if you have visited the cemetery or have anything you would like to share about family members who are buried there.
Sources: 'Norwood: Cemetery, schools and domestic and other buildings', in Survey of London: Volume 26, Lambeth: Southern Area, ed. F H W Sheppard (London, 1956), pp. 180-187. British History Online http://www.british-history.ac.uk/survey-london/vol26/pp180-187 [accessed 23 April 2019].