International Day for the Elimination of Violence against Women 25 November

25 November has been declared the International Day for the Elimination of Violence against Women by the United Nations. Sadly, history contains many examples of violence against women, and our database is no exception.

As the United Nations describes:


Violence against women and girls (VAWG) is one of the most widespread,
persistent and devastating human rights violations in our world today
remains largely unreported due to the impunity, silence, stigma
and shame surrounding it.
In general terms, it manifests itself in
physical, sexual and psychological forms.
To further clarify, the Declaration on the Elimination of Violence Against Women
issued by the UN General Assembly in 1993, defines violence
against women as “any act of gender-based violence that results in, or is likely to result in, physical, sexual or psychological harm or suffering to women, including threats of such acts, coercion or arbitrary deprivation of liberty, whether occurring in public or in private life.

The Mystery of the Woman in the Grave of Cora Crippen

The Deceased Online database contains the burial entry of Cora Crippen's alleged remains are located in St Pancras and Islington Cemetery in East Finchley, North London. Below, is a copy of the burial register page from our database. Cora's entry is on the last line. It reads, "Remains of Cora Crippen" - a reference to the violence meted out on this woman's body. 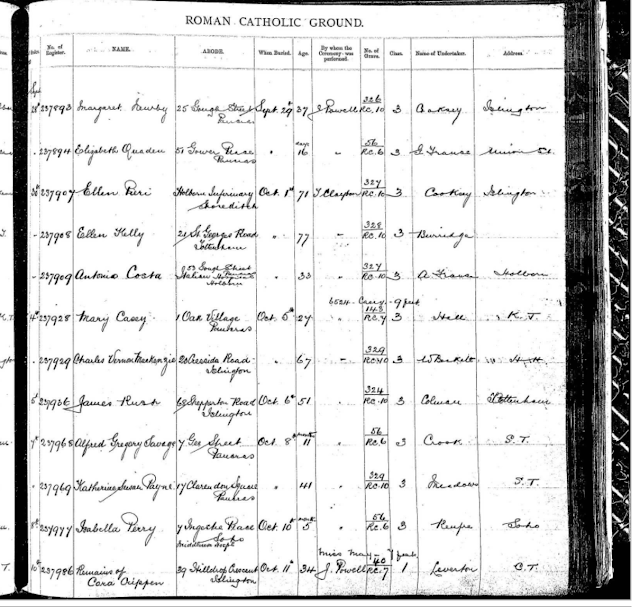 The identity of Corinne Kunigunde 'Belle Elmore' Crippen (1 Sep 1872- February 1910) has often been subsumed into that of her husband and alleged murderer, Dr Hawley Harvey Crippen (September 11, 1862 – November 23, 1910). Like many female victims of violence, she has often been portrayed in a negative light, with descriptions of a two-dimensional person. Her many talents, friends, philanthropy, and hard work are too often overlooked. She has been dismissed as a "just", "failed music-hall artist", and a woman who had many affairs
Born born Kunigunde Mackamotski in Brooklyn, New York City, USA to a German mother and a Polish-Russian father, she later changed her name to Corinne "Cora" Turner. She left home at 16 to follow her dreams of a career on the stage. After taking acting and vocal lessons, she began performing as an actress and opera singer.

When she was still in her teens, she met the widowed homoeopath and father-of-one, Hawley Harvey Crippen, who was ten years her senior. Although he referred to himself as, 'Doctor', he was not a qualified medical doctor. Crippen had left his son with his parents when he relocated to New York. On 1 September 1892, when Cora was only 19, the couple married in New Jersey (source: Ancestry.com. New Jersey, Marriage Records, 1670-1965).

Three years later, in 1897, Crippen sailed for England. Cora had an active social life and became treasurer of the Music Hall Ladies Guild. Crippen worked in London initially as a distributor of patent medicines. In 1899, Crippen's employer, Munion's, sacked him for neglecting his work in favour of his wife's stage career.

In 1905, the Crippens moved north to 39 Hilldrop Crescent, off Camden Road in north London.

After a dinner party at the house on 31 January 1910, Cora disappeared. Shortly afterwards, Crippen's  new lover, Ethel le Neve, moved in. After Cora's friends became concerned, Crippen told them that Cora had died in California. A police search revealed nothing initially, but with a second search, human remains were found in the cellar. By now, Crippen had fled to Belgium, from where he set sail Canada. He was captured aboard ship and hanged in Pentonville Prison in November 1910. Crippen always maintained he was innocent. It is unclear why he ran or told others that Cora had died.

In 1911, the estate of Cunigunda, otherwise Cora, Crippen of Hilldrop Crescent, Middlesex was granted by administration to Harold Otto Seyd, solicitor attorney of Theresa Hunn. Her effects were worth £175.

Later, a DNA investigation indicated that the remains found were not those of Cora Crippen. If this is the case, then whose remains are lying in the grave in St Pancras and Islington Cemetery?


That a woman's remains have been discovered and (seemingly) falsely identified, but that no calls have been made to identify the true victim, is worrying. That this woman was the victim of violence (either before or after death) is not in doubt. The mutilated remains speak to that. If this is not Cora Crippen, then perhaps further DNA investigation should be undertaken to find this woman's true identity.

Do you have examples in your family tree of women who died as a result of violence? Have you been able to learn more about their lives and identities? Please do share your stories via the Comments Box below or on our Twitter and Facebook pages!