As today, 26 August 2020, is International Dog Day we take a closer look at the canine connections in the Deceased Online database 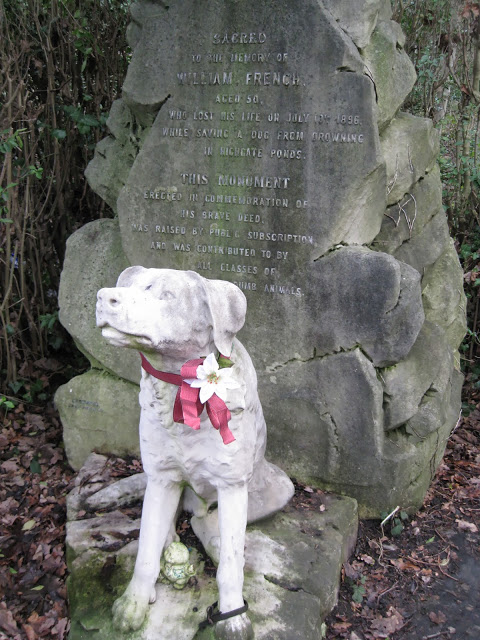 Monument to William French and the dog he rescued in St Pancras Cemetery, north London

In honour of the day, we wanted to celebrate the bravery and canine love of 50-year-old William French who drowned 13 July 1896 while rescuing a dog in Highgate Ponds on the east side of Hampstead Heath, now in the London borough of Camden.

The Referee newspaper of 19 July 1896 gave details of the inquest, held the previous Wednesday:

He had gone with some companions to the ponds near Parliament Hill, Highgate, and had taken with him the dog of his employer. The dog, a Manchester terrier, after swimming a short distance, seemed to be in difficulties, and, fearing that it would sink, French explained, "I can't let the poor little beggar drown!" Divesting himself of his coat and hat, French plunged in and succeeded in reaching the dog, and both went under together, but on coming to the surface they were separated. The dog reached the shore; ut French throwing up explained, "I'm knocked!" and disappeared.

The Morning Post of Wednesday, July 15, 1896 (p. 8) described French as a 'stableman'. The Islington Gazette of the same day printed that he lived in Flowers-mews, Upper Holloway.

William French and his bravery are immortalised in one of the most striking monuments in the St Pancras section of St Pancras and Islington Cemetery in East Finchley, north London. The stone was built by Cuthworth and Son, Pentonville Road.

The inscription on the stone reveals that the monument, known as the 'Highgate Dog', was paid for with money raised from fellow animal lovers: 'all classes of lovers of dumb animals'. French was originally buried in a pauper's grave, but moved to a 'first class' plot at the request of the Victorian writer and bon vivant George R. Sims and some of his dog-loving friends so that, "French's gallant act of humanity shall not pass unrecognised" (Westminster Gazette, July 18, 1896).

As is clear by the good condition of the ribbon and flower in this photograph, French's grave continues to receive regular visits.

Other dog-related graves can also be found in the Deceased Online database. In Highgate Cemetery, a short walk from Highgate Ponds where William French lost his life, is the grave of Charles Cruft (1852-1938), founder of the eponymous dog show.

Have you come across any graves featuring dogs? Or do you have any particularly dog-loving ancestors? Have you been able to learn more about their lives? Please do share your stories via the Comments Box below or on our Twitter and Facebook pages!