This week we reveal details of the latest cemeteries to be added to the Deceased Online database.

Well done to those who recognized Greenwich Cemetery from the teasers on our Twitter and Facebook pages!

Greenwich and Eltham Cemeteries are both managed by the Royal London Borough of Greenwich. The collection includes all data, comprising around 108,000 burials, with scans of burial registers, grave details (i.e. the details of all those buried in each grave), cemetery grave location maps and some memorial and headstone photos to follow shortly.

The Council's cremation records (Eltham Crematorium, 202,000 mostly with register scans) are already on the database. We'll be revealing more about Eltham in next week's blog.

Later this autumn, we will be adding the Council's other three cemeteries: Charlton, Plumstead, and Woolwich. Once all these cemeteries’ data is on the website, the total records covered for Greenwich Council will number nearly more than half a million.
Situated by Shooter’s Hill, Greenwich Cemetery is one of the largest in London and has sweeping views across the city. In fact, the views are quite stunning with panoramas that stretch from south west over all of central London and to the east - taking in many well known landmarks, including the Shard, Canary Wharf, the Millennium Dome, the Emirates Air Line (cable car), and the Olympic Village.

Founded in 1856, the Cemetery has a fascinating history. Like many other Victorian cemeteries in the capital, Greenwich today contains wonderful plant life and feels very rural, despite its urban setting, close to the Thames and a couple of miles from the City. There are flowerbeds within an area of lawn at the entrance, and several significant tombs are found near the two striking Gothic chapels. A particularly good sculpted group lies at the top of hill towards the west, near the War Graves.
The Shooter’s Hill cemetery contains an interesting monument on the former grave of the exiled Russian revolutionary, Nikolai Platonovich Ogarev (aka Nicholas Ogareff; 1813-1877), whose bicentenary is next year. In 1966, Ogarev’s remains were exhumed from the grave and cremated. His ashes were then taken to Russia by two members of the Soviet Writers’ Union. One of them described Ogarev as “the greatest Russian revolutionary writer we have ever had. When his ashes reach Moscow they will be given the heroes welcome.”1 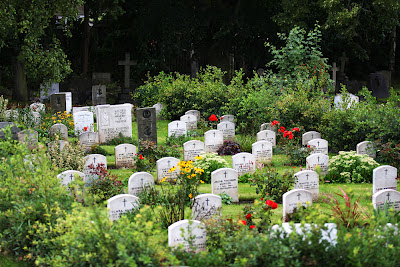 There is a strong military presence, also, with the Commonwealth Burial Ground, 556 burials from the First World War, and 120 from the Second. Part of the beautiful Norwegian section is dedicated to 30 refugees who were killed during the Second World War. More than 260 of the First World War dead can be found in the impressive 'Great War Heroes Corner', with its views of Crystal Palace and the City.

The considerable military connection is partly explained by the proximity of the military academy and other institutions at Woolwich. Amongst the senior army personnel buried here are General Sir Arthur Holland (d.1927), Commandant of the Royal Military Academy, and Surgeon General James Jameson (d.1904), who was the Director General of the Army Medical Services in South Africa and the Commander of the British Ambulance Division in the Franco-Prussian War.

Lieutenant-General Sir Arthur Edward Aveling Holland, KCB KCMG, DSO, MVO, M.P. for Northampton (13 April 1867 – 1927) was born with the surname BUTCHER, but changed to HOLLAND in 1910. From 1880, when he joined the Royal Artillery, his life was dedicated to the Army. He served in the Burmese expedition of 1885-87 & 1887-89, and from 1895-1898 in India. As “Major Butcher” he was twice mentioned in dispatches for his service in the Boer Wars, and was awarded the Distinguished Service Order (D.S.O.). Eventually, he became Commandant of the Royal Military Academy, Woolwich, at which he was “highly successful” 2 according to his obituary. Holland was insistent on being sent to the front in the Great War, being appointed Brigadier=General, R.A., 8th Division. The promotions continued through the war, culminating in the appointment to lieutenant-general in January 1919. Holland became an M.P. in 1924 for the Unionists, taking the seat from Labour’s Margaret Bondfield, who would later become the first woman Cabinet Minister in the UK.

Greenwich Cemetery records can be accessed on the database from Friday 14 September 2012, with the remaining records appearing later in the month.

Do you have ancestors buried in any of the Royal Borough of Greenwich cemeteries? We’d love to hear from you. Do leave a Comment in the box below!