This week we have three copies of Nick Barratt's new book Greater London to give away.

To celebrate the release of the latest collections of London records on the Deceased Online database, we have teamed up with the publisher Random House for an exciting new competition.

This week we will be uploading over 100,000 burial records for Manor Park Cemetery, dating from 1930 to the present day. We'll be adding the final stages throughout February. In the Spring, we'll add the records of Brompton Cemetery, West London - one of the "Magnificent Seven" Victorian cemeteries that were built just outside the centre. 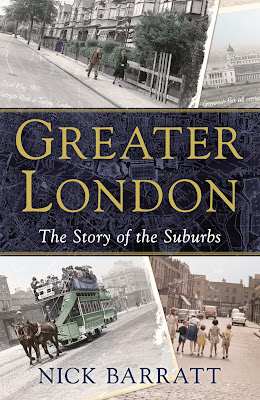 Nick Barratt's book, Greater London: The Story of the Suburbs, looks further into the Magnificent Seven and at the growth of London that led to them being built.

For Nick, though, London's most significant cemetery is Abney Park in Stoke Newington. He said, "Despite the architecture displayed in the mausoleums of Kensal Green and Highgate, for example, I think the most important was Abney Park in Hackney – simply because it conformed most closely to the work of JC Loudon, the visionary champion of breathing spaces for the Metropolis and a great fan of using cemeteries as public parks where people could exercise and take the air; in his words, it was ‘one of the most complete arboretums in the neighbourhood of London’."


The book is a fascinating read, and shows how different parts of London became suburbs as the city grew over the years. Nick has done a great job condensing centuries of history, 600 square miles, and millions of people into just one book.


Nick told me, "The sheer size and scale of the project was very daunting, and the temptation was to try to cover too much – a complete history, borough by borough, would become repetitive and boring so I plumped for a thematic approach.  Suddenly the whole evolution of London made sense, particularly when viewed with the maps that showed the sudden expansion in the early to mid-19th century – it’s amazing to think that the vast majority of today’s suburbs were just open farmland so recently."

One interesting passage relates to St Pancras and Islington Cemetery, whose records can be searched on the database:

The next change to Finchley's fortunes had to do with the dead,
rather than the living. By the mid nineteenth century London's ceme-
teries were bursting at the seams. Built to serve a much smaller city,
they simply couldn't cope with the new demands placed on them. The
city therefore turned to the countryside, and Finchley came to house
not just one but two major cemeteries in 1854 on what until 1816
had been common land: the St. Marylebone (now East Finchley),
established at Newmarket Farm; and the St Pancras and Islington on
Horseshoe Farm. The latter was one of the largest in London, and the
first to be publicly owned. Over the next decades, thousands of people
were buried there, and Finchley became familiar to successions of
mourners visiting the cemetery chapels and the graves of their departed
relatives.

The book also mentions a pressure group, active in 1845, called the National Society for the Abolition of Burial in Towns. Groups like this contributed to the closure of traditional urban graveyards and led the way for the opening of larger cemeteries in (what were then considered) the suburbs. Nick believes these groups were hugely influential in the history of Greater London's cemeteries: "They were key; the early Victorian age was one of industrial progress, grand plans and large-scale engineering projects, often with little thought to the consequences for the urban poor who were swept away, or left in worse conditions than before. It was also the era when pressure groups and social reformers saw the suffering and championed a whole range of causes that ultimately created a better society, whether it was the provision of free drinking water (we still see the occasional drinking fountain in the suburbs) or in this case, the need to close the appallingly overcrowded urban graveyards."

The Deceased Online database includes records of churchyards in Greater London, like Pinner where Horatia Nelson is buried. Not so long ago these were rural villages. Sadly, as Nick points out, not all survive:
"The further out you go, the more ‘village’ churchyards you are likely to find, though many of these have now been cleared and replaced with benches and small landscaped parks. However, you do still find the occasional gem that reminds you of suburban London’s rural past. Old St Andrew’s Church, Kingsbury, in the borough of Brent, is a perfect example – now disused, the church itself has been awarded Grade I listed status whilst there are 4 Grade 2 listed monuments in the small grounds."

For a chance to win a copy of the book, let us know the answers to four special questions linked to the Deceased Online database. We will reveal the next set of questions next week. We'll give you entry details next week but make a note of your answers and be ready.....

The first two questions are:

We'll be announcing the three winners at Who Do You Think You Are? Live and on this blog, Facebook and Twitter later this month.