This week we uploaded the final set of records from Brompton Cemetery. Amongst the new data on Deceased Online are the burial details of some of the most significant and celebrated Londoners of the nineteenth century.

This year is the bicententary of the birth of John Snow (1813-1858), pioneer epidemiologist and the man who discovered the causal link between contaminated water and cholera. He was also a practising physician, who pioneered anaesthetic methods and administered chloroform to Queen Victoria during the births of Beatrice and Leopold.

Originally from York, Snow was the son of an unskilled labourer. Through hard work and the support of the ragged schools, he qualified as a physician at medical school in London in 1843 and began working in Soho. At the time it was popularly believed that cholera was caught from miasma, or ‘bad air’. In 1849, Snow produced a document, On The Mode of Communication of Cholera which suggested that cholera was due to ingesting a contaminant from the excrement of an infected person, often through drinking affected water. When a cholera epidemic struck again in Soho in 1854, Snow tested his hypothesis. He eventually established the source of the contamination as a water pump on Broad Street. Snow demanded the removal of the handle of the pump and the epidemic declined. This discovery led to the eradication of cholera in Britain and saved countless lives.

Despite his teetotal and vegetarian lifestyle, John Snow died of a stroke at the young age of 45 years and is buried in Brompton Cemetery.

Besides the scans of burial records and grave details, all maps of burial locations are also now available on the website, together with photos of a number of the more famous and celebrated memorials.


Read more about the early years at Brompton Cemetery here.

Brompton has many military connections, with both a military memorials area and a memorial to the 2,600 Chelsea Pensioners who are buried there. There is also a high number of Victoria Cross recipients. The Burgoyne family is one of several military families represented in the Cemetery. Field Marshall Sir John Fox Burgoyne (1782-1871) served with the Royal Engineers, fighting against Napoleon and later in the Crimea. He was appointed Commander of the Tower of London in 1865. 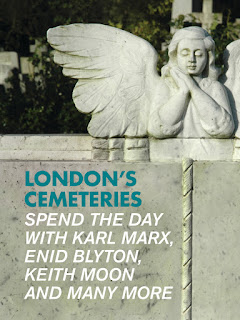 This is the final week of our competition to win copies of Darren Beach’s essential pocket guide, London’s Cemeteries. We have two copies for the first out of the hat who can tell us the answers to these two questions:

Q1. Name the respected Jewish journalist, writer and broadcaster who died in 2004 and is buried in Brompton Cemetery?  The Times, for which he was a columnist for a number of years, described him in an obituary as "the most famous journalist of his day".


Q2. Which Pre-Raphaelite painter and poet had his wife's body exhumed in Highgate Cemetery?

Q1.  2013 is the 150th anniversary of probably the world's greatest sporting publication founded by an English cricketer.  Name either the annual publication or the cricketer's name?
A.  John Wisden, Wisden's Cricketers' Almanack.

Q2.  Who are the father and son Victorian civil engineers buried at Kensal Green Cemetery?  The son built some of the most famous structures and engineering projects of the 19th Century.
A. Sir Marc Isambard Brunel and Isambard Kingdom Brunel.

Congratulations to Janet Spink from Dorset and Jane from Derbyshire who won last week! Look out for this week’s winners on our Facebook and Twitter pages.