This week we’ve begun work on a project to identify previously celebrated sportsmen and women who are contained in the Deceased Online database. If you have found, or are related to, any successful sportspeople in our records, please let us know. We have already found the following in our collections, but need your help to increase our list.

Your discoveries will help us to compile a file of 'forgotten heroes and heroines' in British sport. Please email your contributions to info@deceasedonline.com.

London’s Cemeteries Competition Results
Thanks also to all who entered our four week competition to win copies of Darren Beach’s London’s Cemeteries (Metro Publications, 2011).  The names of the winners have been announced on our Facebook page, but the full list is below.
We hope all the prize winners are finding the guide useful. 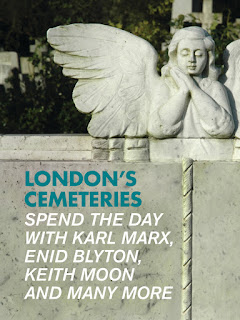 Competition Questions and Answers
Q1. Which of Beatrix Potter’s great literary characters is said to have been inspired by a memorial in Brompton Cemetery?
A1. Squirrel Nutkin

Q2. Name the sugar merchant, philanthropist and founder of one of London’s most famous art galleries, buried in West Norwood Cemetery?
A2. Sir Henry Tate

Q3. In 1999, Time magazine named this person as one of the top 100 most important people of the 20th Century. She was leader of the British suffragette movement. What were her first and second names?
A3. Emmeline Pankhurst.

Q4. Buried in Highgate Cemetery, what was the pen name of the celebrated novelist Mary Ann Cross?
A4. George Eliot.

Q5. 2013 is the 150th anniversary of probably the world’s greatest sporting publication founded by an English cricketer. Name either the annual publication or the cricketer’s name?
A5. John Wisden, Wisden’s Cricketers’ Almanack

Q6. Who are the father and son Victorian civil engineers buried at Kensal Rise Cemetery? The son built some of the most famous structures and engineering projects of the 19th Century?
A6. Sire Marc Isambard Brunel and Isambard Kingdom Brunel.

Q7. Name the respected Jewish journalist, writer and broadcaster who died in 2004 and is buried in Brompton Cemetery?  The Times, for which he was a columnist for a number of years, described him in an obituary as "the most famous journalist of his day".
A7. Bernard Levin

Q8. Which Pre-Raphaelite painter and poet had his wife's body exhumed in Highgate Cemetery?
A8. Dante Gabriel Rosetti.
Twitter Competition Winner
Last week we ran a competition to increase the number of our followers on Twitter. The 1000th follower and the winner of the 100 free credits is Valmay Young (@valmayuk). Congratulations, Valmay! 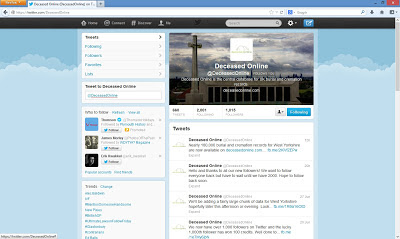