July 25, 2013
This week, I look at the social and cultural influences on the design of Victorian and Edwardian cemeteries, monuments and headstones

Currently, there are around a thousand Victorian-built cemeteries on the Deceased Online database. I have included a number of images from them in this blog. Many more can be found on the website.

Mourning practices and artefacts, such as rings and lockets of the deceased's hair, were in common use when Victoria acceded the throne in 1837. But the elaborate funerary rituals we associate with the Victorian era only became widespread from 1861, after the sudden death of Prince Albert. The widowed Queen Victoria began a period of mourning that would last forty years until her own death in 1901.
By the 1890s, described by Julian Litten as 'the golden age of the funeral', Britons of all backgrounds were were copying the royal manner of bereavement. They wore black dresses, crape, gloves, hair combs, top hats, and bonnets. They drew their blinds and covered their mirrors. Black jet from Whitby became ubiquitous as the official jewellery of mourning, even being sewn as beading on bodices. When the day of burial arrived, the lined and polished wooden coffin would be carried on a hearse, or a handcart for the poorest. Symbolic funeral flowers, such as lilies, would be strewn on the hearse and lain at the graveside. And every respectable funeral would be marked by a long procession following the coffin to the burial ground.

Another influential aspect of the Queen's mourning was erecting monuments in memory of her husband. Perhaps the most notable of these is the Albert Memorial in Kensington Gardens. Upper class mourners followed suit, building monuments and follies on their estates. The emerging industrialist class built theirs in urban locations. James Williamson, Lord Ashton (1842-1930), ran a major coated fabrics business in the city of Lancaster. After the sudden death of his second wife, Jessy, in 1904, Williamson commissioned a 150 foot domed folly in the Edwardian baroque style. This Ashton Memorial opened in 1909, and continues to tower over the Lancaster skyline.

Within cemeteries and burial grounds, mourners erected mini versions of these grand memorials. This tomb in Brompton Cemetery bears the image of the deceased actor and dramatist Henry Alfred Pettitt (1848-1893) on a marble plaque. 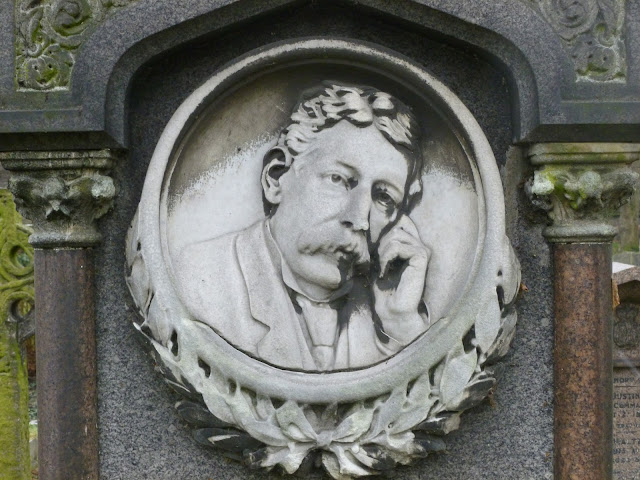 Towards the end of the nineteenth century, the size and elaborate nature of the memorial or headstone was used to reflect a family's social status as much as their feelings towards the deceased. Details, such as Ancient Greek, Romanesque or Egyptian symbols, feature in many cemeteries from this period. These include urns (Roman cremation), wreaths (eternal life), broken columns (life cut short), and obelisks (Egyptian: eternal life). Celtic crosses are common in all the Victorian burial grounds in the database. The circle used on the cross symbolizes eternity and resurrection. Other popular symbols include angels, crosses, and flowers. The iconography of headstones not only tells us about those who have died, but can also provide clues as to the feelings of those who commissioned their designs.

These practices were not exclusive to the upper or middle classes. Saving money for a 'decent' burial was of great importance to members of the working class. As noted in Manor Park Infant Mortality, the Victorian sociologist Charles Booth, writing in 1898, observed of contemporary Eastenders, "Next to births, the commonest events to the factory girl are funerals; and she enjoys few things so much as taking part in a funeral procession."

After Victoria died in 1901, Edward VII refused to allow the mourning period of his mother to go beyond three months. As a result, some funerary rites faded away. However, the relentless tragedy of the Great War ensured that public displays of mourning continued well into the twentieth century. In the wake of the Silvertown munitions factory explosion in January 1917, the local community ensured due respect was shown. The funeral procession for the burials of the firemen extended to a quarter of a mile.

Military symbolism is particularly notable on headstones of this period. The anchor was commonly used to remember those who served at sea, as in this example in Woolwich Cemetery, marking the grave of 2nd Air Mechanic G. R. Woolnough of the Royal Naval Air Service (RNAS). 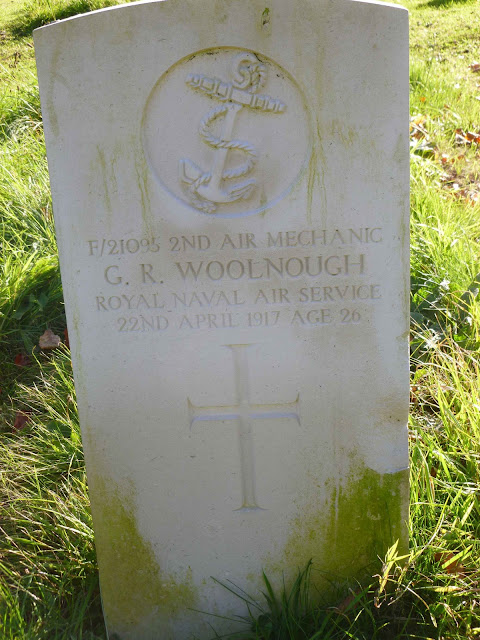 Sadly, not everyone in the Deceased Online database was buried in a flower-covered coffin before a crowd of jet-wearing mourners. Millions were buried in common or pauper graves. They would have no headstone, no symbolic memorial over their place of burial. But many were loved and missed as much as those in the grandest of graves, their families' misery perhaps only compounded by the costly and elaborate monuments all around.