As reported on our Facebook and Twitter pages earlier this week, we have uploaded nearly 230,000 burial and cremation records for Wakefield Metropolitan District Council to the database. This includes the industrial towns of Castleford, Featherstone, Knottingley, Pontefract and the city of Wakefield.


The records date from 1857 for the most historic cemetery, Castleford Old Cemetery. Most of the collection dates from the Victorian period, although the twentieth century Pontefract and Wakefield crematoria are also included. The full list of cemeteries will be explored in future posts.


The south east of the district has a strong mining heritage, and this is represented at the locally based National Coal Mining Museum for England. By 1869, there were 46 working mines on the outskirts of the city of Wakefield. The last pit in the district, the Prince of Wales at Pontecfract, closed in 2002.

This photograph from Wakeford Council’s collection shows a miners’ demonstration in Aire Street, Castleford in 1903 at the time of a protracted strike over enforced reduction in pay at Wheldale and Fryston Colliery. 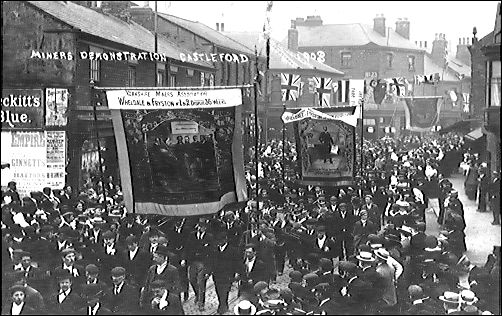 Thousands of people who lived and died in this area were connected in some way to the coal mining industry. In Wakefield, which became a city in 1888, others worked in grain mills, malt kilns, chemical and dye works, iron foundries and making glass.

Perhaps one of the most unique industries here is the production of liquorice sweets. Liquorice had been used in Britain as a medicine for centuries, but it wasn’t until the creation of the Pomfet (Pontefract Cake), or Yorkshire Penny, in 1760  that it was used as sweet. At its height Pontefract had thirteen liquorice factories. Today there are just two: Haribo and Tangerine.

I shall be looking further into the people and social history of the Wakefield area in next week’s post. Look out for more registers, grave details and colour maps which will be added soon to the database.