December 24, 2014
For many of us, Christmas is a time of family, feasting and celebration. But for the working classes of the late 18th and early 19th century, Christmas Day was regarded as a rare break from daily toil. Nevertheless, some Georgians and Victorians were obliged to continue working in the holidays. Among them were priests, cemetery staff and gravediggers who oversaw Christmas burials. 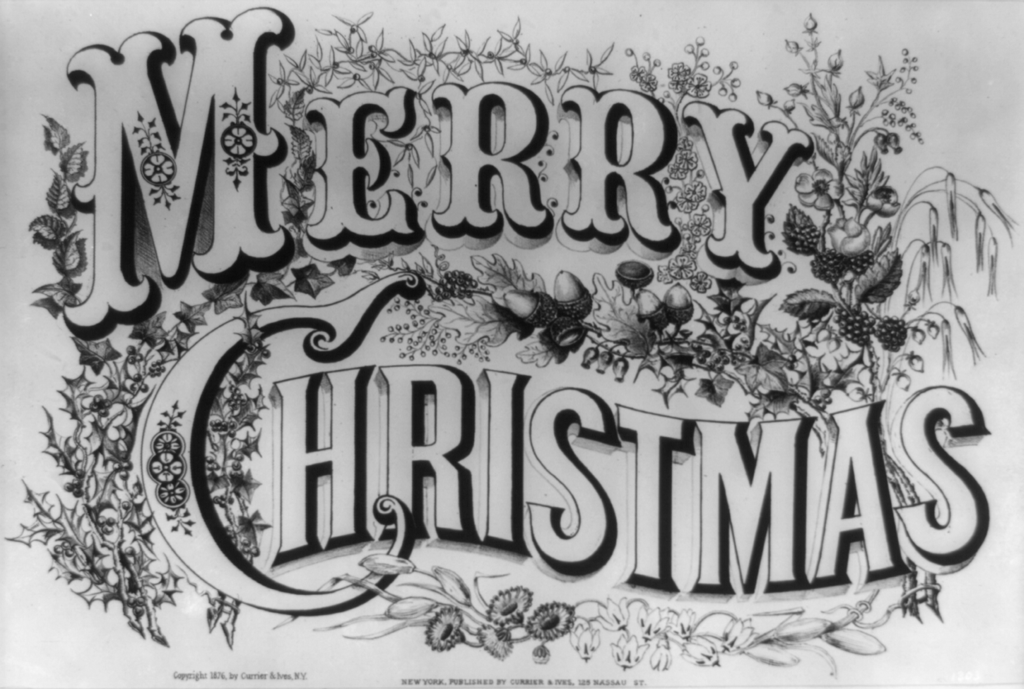 It faded on the crowing of the cock.
Some say that ever 'gainst that season comes
Wherein our Saviour’s birth is celebrated,
The bird of dawning singeth all night long.
And then, they say, no spirit dare stir abroad.
The nights are wholesome. Then no planets strike,
No fairy takes, nor witch hath power to charm,
So hallowed and so gracious is that time.
Marcellus speaking about the season of Christmas in Shakespeare's Hamlet, Act 1, Scene 1.

Although our British ancestors were taught to consider Christmas as a holy time, if you have working class relatives, you may have found records of them being married on Christmas Day itself or Boxing Day. This was common among the working masses as, before the introduction of bank holidays in 1871, these were the two of the few days when they were able to attend church in daytime outside work hours. In London and other cities, the bride and groom were even able to marry for free at Christmas and Easter.
Unlike baptisms and marriages, of course, burials are unplanned. Some well-known individuals in the Deceased Online database sadly met their ends during the Christmas season. William Makepeace Thackeray (1811-1863), the author of Vanity Fair, was so inspired by his friend Charles Dickens' Christmas writings that he wrote his own "Christmas Books", beginning with Mrs Perkin's Ball in 1847. By 1863, 52 year old Thackeray had become ill and he was found in his bed on Christmas Eve of that year, it is believed, after suffering a stroke. He was buried in Kensal Green Cemetery in London six days later.

Also in the database are burials on the holy day itself. On 25th December 1785, a Sarah Mollatt, daughter of Charles, was buried at the "Old Meeting" (site of the old chapel) of St Paul's Church in Bedford. 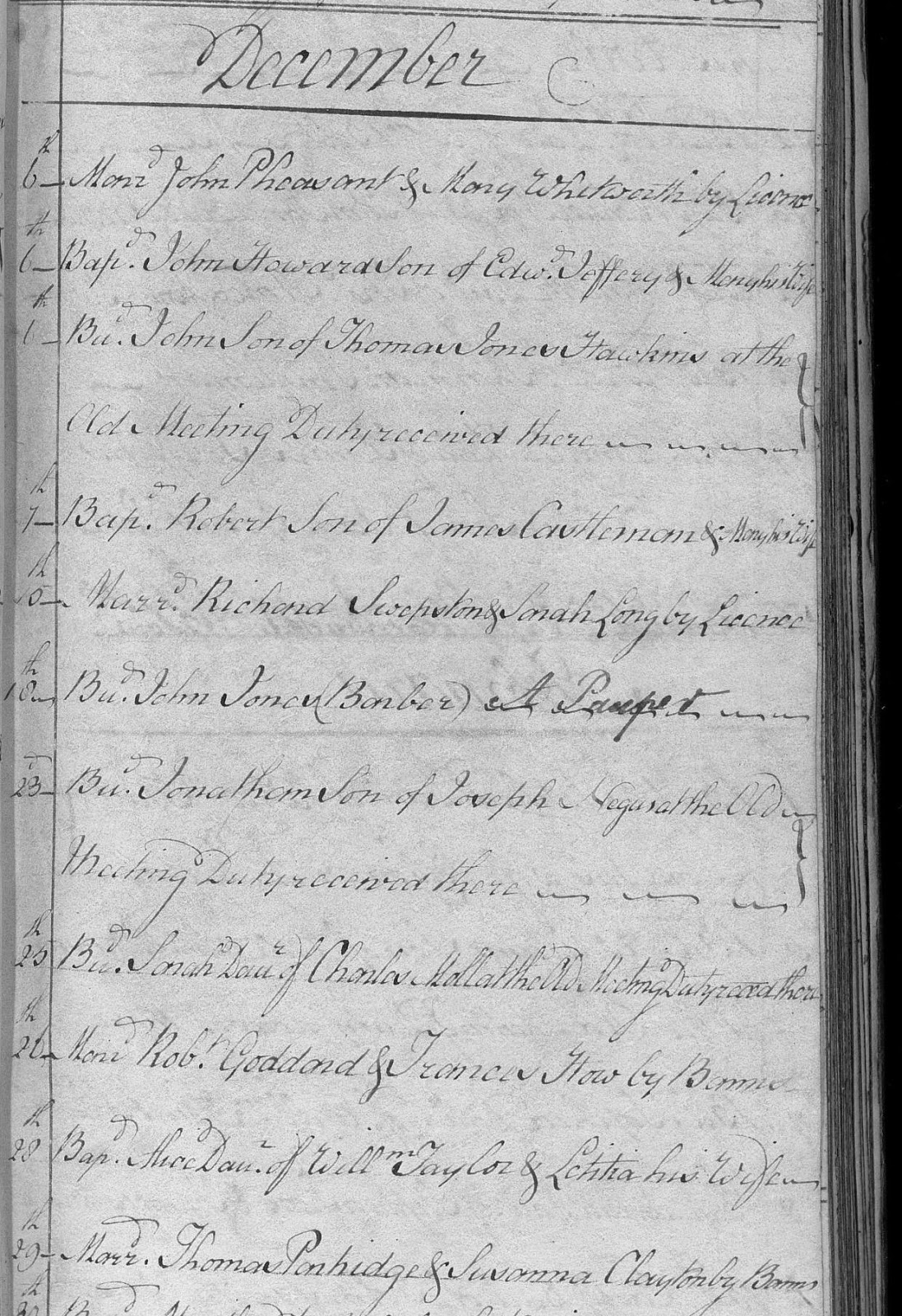 In Blackburn, Lancashire, 19 year old weaver Dennis Shaw was buried in the Roman Catholic section of the newly opened Blackburn Cemetery on Christmas Day 1857. As stated in the burial register pictured below, Dennis was the son of Henry and Elizabeth Shaw, and had resided at 61 Hutton Street, Green Bank in the town.
On a different note, we have three burial records for females named Mary Christmas - and many more with middle names. It is not too surprising to find the surname Christmas in burial records. Two of the Mary Christmases were married, but one (buried 8th November 1801 at Spa Fields burial ground in Clerkenwell, London) was a 2 year old girl. I wonder if her parents were aware of how the full name sounded when they chose to call her "Mary". According to the Dictionary of American Family Names (OUP, 2013), the name is fairly common across southern England, originating as a nickname for someone who was born at Christmas or had a particular association with the festive season.

One of the most seasonally-named entries in the database is that of 58 year old Mary Christmas who was buried at Brompton Cemetery in west London just nine days before Christmas on 16th December 1854. Born in Borough, south London, Mary had worked as a bonnet maker and was married to Samuel Christmas, a hatter (Ref. 1851 Census Class: HO107; Piece: 1484; Folio: 101; Page: 42; GSU roll: 87809). Despite living at 62 Burlington Street, Piccadilly, very close to some of the most expensive addresses in London's Victorian West End, Mrs Christmas was buried in a Common Grave.

When I checked the grave details on the database, I discovered that, unbelievably, Mary Christmas shares her burial place with a Mr. James Winter, who was buried two days after her, on 18th  December 1854. James was 66 years old and came from 26 Stephen Street off the Tottenham Court Road.

I imagine that any novelist who chose to cast two characters named Christmas and Winter together in a pauper's grave on a cold December day in Victorian London would be criticized for lack of realism. But, being a genealogist, I've learned many times over that the truth is often far stranger than fiction!

Next week I shall be looking at Hogmanay and New Year burial traditions. In the meantime, do let us know if any of your ancestors were buried at Christmas or if you have found any Christmas-themed names in our database. We love to hear from you on our Facebook and Twitter pages.

And finally, we’d like to take this opportunity to wish all our users a very Happy Christmas from everyone at Deceased Online!