December 12, 2014
As the local council officially announces the launch of our Lincoln Collection, I look back at the social changes that led to the opening of the city's first cemetery in 1856.

The Lincoln Collection on Deceased Online incorporates over 140,000 records dating back to the 1850s. Of the five cemeteries in the collection, three - Canwick Road, Eastgate, and Newport - date from 1856. But Lincoln's councillors had identified a need for a cemetery almost decade earlier.
On the 12th November 1846, the Lincolnshire Chronicle reported that the Cemetery Committee worried that:


"it appeared to be an impossibility to form a Cemetery in Lincoln at present, in consequence of the expense and trouble which would arise. Instead the Council proposed to focus on clearing the "nuisances now existing in the town" and to pass a bill for ""sanatory [sic] improvement".

One of the key difficulties was a problem with the city's drainage system. There were also general concerns about unhealthy living conditions. Lincoln's poor subsisted in squalor, with two families to a house:


"The dirt was thrown in front of their door and allowed to remain there, whilst pigsties and dunghills were nearly close too the inhabitants in many instances."

Meanwhile, as the city's graveyards became increasingly crowded, the debate about cemetery provision was set to increase.

As in other parts of the country, sanitary concerns remained uppermost into the 1850s. The Stamford Mercury of 25 October 1850 reported that there had been three cases of cholera in the past year and that a new drainage system was urgently needed. This figure was far smaller than in more populous neighbouring areas, such as Hull, but there was heightened concern that Lincoln would be unable graveyards and current sanitary situation would be unable to cope in the event of a cholera epidemic. Although the Cemetery was seen by some as an opportunity to make a profit, with extra money being fed back into sanitary improvements, cost remained the biggest concern. By now the Bishop of Lincoln had approved the provision of a Cemetery, but lurking doubts remained over whether the Council could afford the projected £8,000 cost. The Town Clerk worried that there would not be enough people dying in Lincoln to earn enough for the Corporation from fees. As demand for a cemetery grew, a solution to the financial problem needed to be found. Eventually, on 19th May 1854, the Stamford Mercury recorded that the Lincoln Cemetery Committee had decided to appeal to the city's "affluent citizens" to contribute to the project.

In February 1855, the city's churches held meetings to elect their Burial Boards (Lincolnshire Chronicle, 9 Feb 1855, p. 8). Controversy remained about the site of the cemetery. On 23rd March 1855, the Lincolnshire Chronicle reported that a "stormy meeting" had been in held in the Guildhall over whether the site should be "the north-east corner of the race-course" or "the south-end of the cow paddle". A vote settled the matter 42-23 for the cow paddle.

Criticism and controversy persisted until Saturday 20th October 1855 when the foundation stone of the Cemetery was finally laid. Lincoln's streets were full as crowds gathered to watch members of the Burial Board, the Cathedral choir, members of the clergy and 2000 schoolchildren process up to the new site at Canwick Road. At 2 o'clock the choir entered the ceremony enclosure, chanting the 49th Psalm. Following prayers, Richard Carline, the chairman of the Burial Board, made a welcome speech in which he confirmed that the city's churches were to be closed to burials.

Carline then laid the foundation stone, into which was placed a bottle "sealed with the Burial Board seal, and containing the current coins of the realm and a roll of parchment, on which was inscribed the names of members of the Burial Board and the clerks and officials". A brass plate marks the place where the stone was laid. 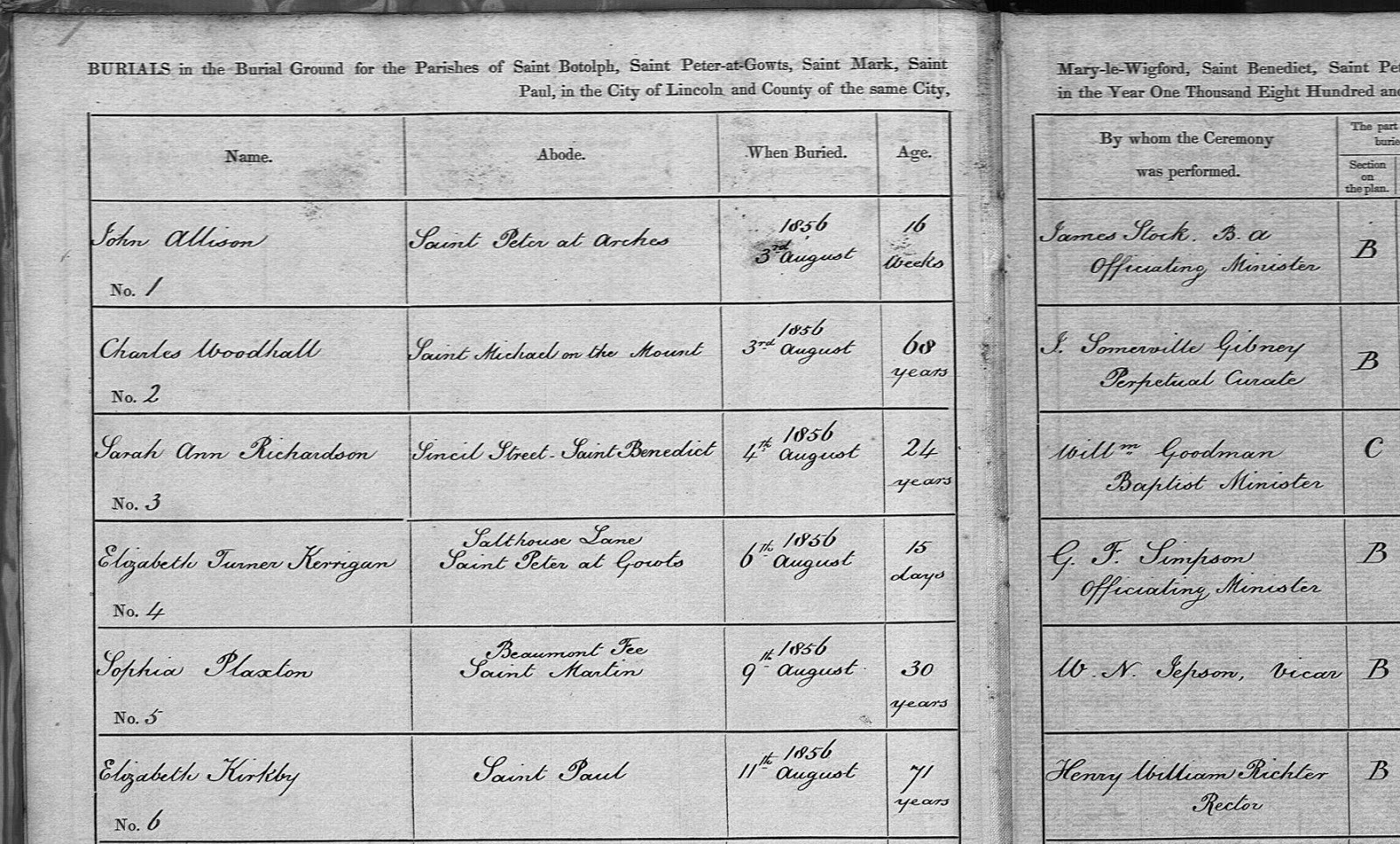 The first interment at the new Cemetery took place on 3rd August 1856. A baby, 16 week old John Allison of the parish of St Peter at Arches, was buried by the Officiating Minister of the Cemetery, James Stock B.A.. The image above shows a close-up of the first page of Canwick Road Cemetery's burial register from the Deceased Online database. Over the next few days, more bodies were buried. Burials were overseen by Anglican vicars, rectors, curates and a Baptist Minister indicating its non-denominational nature. Corpses arrived from parishes across Lincoln, including Saint Michael on the Mount, Saint Benedict, Saint Martin, Saint Paul, and Saint Peter at Gowts.

As ever, we love to hear from you! Please do contact us via our Facebook or Twitter pages to let us know if you have found any of your ancestors in the Lincoln Collection.