February 17, 2016
As a descendant of a long line of Staffordians, I am delighted that records from East Staffordshire Borough Council have just been added to the Deceased Online database

Those of us with industrious Midlands ancestors tend to feel pride in our skilled and creative forebears. Like other Midlands areas, East Staffordshire has a rich industrial heritage, notably in brewing. East Staffordshire Borough Council is based in Burton upon Trent, possibly the most famous brewing town in the UK. Close to Derby, Stoke on Trent, Birmingham and the spectacular Peak District, the council's jurisdiction covers Uttoxeter, Burton upon Trent, Abbots Bromley, Barnton-under-Needwood, Denstone, Ellastone, Hambury, Kingstone, Marchington, Mayfield, Rolleston on Dove and Tutbury.


Stapenhill Cemetery
This Grade II listed cemetery in Burton upon Trent is home to some of the most well-known names in British brewing, such as Bass, Eversheds, Marston and Worthington. By the end of the 19th century, Burton housed more than thirty breweries which, between them, were producing more than a quarter of all beer in the UK. Much of this history is celebrated at the National Brewery Centre in Burton.
The magic of the local beer came from the complex mineral concentration from the River Trent at Burton. High levels of calcium and magnesium combine with low levels of sodium and bicarbonate to create water celebrated from the Middle Ages for its healing properties. The water's excellence for brewing was established by monks but it became celebrated from the 18th century when the new canal system enabled Burton to export beer to London, Liverpool, Bristol and (via Hull) continental Europe. 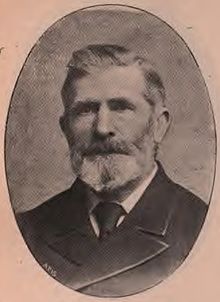 Sydney Evershed was one of a number of Burton brewers whose influence extended beyond industry into the world of politics. Although he was born in Surrey, Evershed moved to Burton by the age of 35. While the Eversheds brewery grew, Sydney became involved in local politics, first as a councillor and then as MP for Burton between 1886-1900. He died in London in 1903, but was buried in Burton, in Stapenhill Cemetery. Like fellow brewer, Michael Thomas Bass, Evershed had children who played county cricket. In 1909 Eversheds brewery merged with Marston and Thompson to become Marston, Thompson and Evershed.
Abraham Bass (23 February 1804-15 August 1882)
The Bass brewery was founded by William Bass (1717-1787) in 1777. Bass grew the brewery to such an extent that by 1784 he was exporting not just all over the UK, but also to Russia. After his death, the brewery was run by his sons, William and Michael Thomas (1760-1827). Michael Thomas's third son, Abraham Bass, was more interested in cricket than brewing and was influential in founding Burton Cricket Club in 1827. Abraham became a celebrated Midlands cricketer, playing for the North in 1840 and from 1843 for Nottinghamshire.He died in 1882 and is buried in Stapenhill. 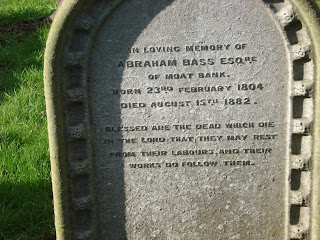 The Bass brewery dominated UK brewing into the 20th century. It withstood market competition later in the century until it was bought by Belgian brewer Interbrew in 2002.

Joseph Reilly/Riley (1829-1909)
Most of those who worked in Burton's breweries came from humble backgrounds. In contrast, Joseph Reilly's background was less humble and more adventurous. His career in brewing followed on from a dramatic career in the Army. Originating in Yorkshire, Joseph Reilly followed his squadron officer father into the Army in 1846 when he enlisted among the men of the 17th Lancers. The regiment was sent to fight in the Crimea in 1854. The 17th Lancers were among those who took part in the Charge of Light Brigade (immortalized a few months later by Alfred, Lord Tennyson), which took place on 25 October 1854. Although most of his comrades were killed or injured, Reilly made his way through the Russian lines to safety. As a result he was awarded the Crimean Medal with Four Clasps and the Turkish Medal. Surprisingly, Reilly was demoted to Private in 1856 after a Court Martial. The following year he again risked his life during the fighting of the Indian Mutiny. After being discharged on 30 March 1870, Reilly began working as a lowly brewery labourer in Burton. Eventually he was promoted to brewery foreman. While living in Burton, he married and had children, and later led a comfortable retirement with the means to afford to employ a servant. Riley suffered ill health towards the end of his life, dying of a hemorrhage in 1909.

Although several brewers have been buried at Stapenhill Cemetery, pioneers of Burton's other notable industries can also be found in the database. Among them is John Robson Warham (1820-1886), a founding partner of Thornewill & Warham, significant civil engineers in Burton and builders of breweries and magnificent iron bridges, like the Ferry Bridge.


We would like to hear from anyone whose ancestors are buried in either Stapenhill or Rolleston Cemeteries, particularly if they were involved in brewing. Do let us know via the Comments Box below or on our social media platforms, Facebook and Twitter!