International Day of Women and Girls in Science

February 11, 2016
In honour of the International Day of Women and Girls in Science on 11th February, this week's post celebrates the lives of some of the female scientists in the Deceased Online records

The very first International Day of Women and Girls in Science is being observed across the world, today on Thursday 11th February 2016. The United Nations declared this date should mark the achievements of women in science, and should be used to inspire and engage more females to become involved.

Britain has a long history of women working and innovating in science, but sadly they have not always been as celebrated as their male counterparts.

Yesterday (10th February) marked 174 years since the birth of astronomer, Agnes Mary Clerke, in County Cork, Ireland. Both Agnes and her sister, Ellen Mary Clerke (1840-1906) were educated at home and both went on to work in astronomy. Agnes was writing about astronomy at the age of 15. In their thirties, she and Ellen studied further in Italy. Agnes moved to London in 1877 and published her seminal article, Copernicus in Italy in the Edinburgh Review of October that year. Her work involved collating and assessing the results of others' stellar and solar research, producing authoritative accounts which influenced contemporary astronomers.

Clerke's influence was such that A. Chapman in The Victorian Amateur Astronomer (Wiley-Praxis, 1998), argued that, "No other single figure has a better case when it comes to being considered as the founder of the history of astronomy as a serious, scholarly study." For her accounts, she was awarded the Actonian Prize by the Royal Institution in 1892 and in 1903 was elected as an honorary member of the Royal Astronimical Society - a position previously only held by two other women. Agnes Clerke died in London on 20th January 1907 and was given a Catholic burial at Brompton Cemetery on the 23rd. She is buried in a family grave, alongside her sister, Ellen Mary. Both their records can be found in the Deceased Online database. 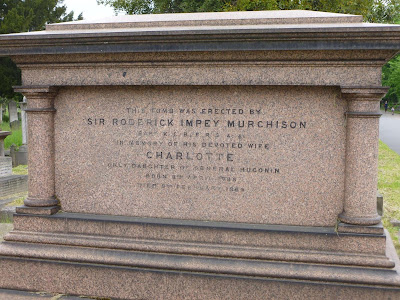 Also buried in Brompton lies Charlotte Murchison (1788-1869), whose died almost exactly 147 years ago on 9th February 1869. Murchison was born Charlotte Hugonin in Hampshire in 1788. Like Clerke, Murchison did not earn money through science but depended on family inheritance. This is a sad reflection of women's limited educational opportunities in the 18th and 19th centuries Charlotte married Roderick Impey Murchison (1792-1871) in 1815. Between 1816 and 1818, the couple travelled across Europe where they met the renowned scientific writer, Mary Somerville (1780-1872). Inspire by her new friend, Charlotte developed a serious interest in geology and persuaded Roderick to share this, taking field trips together along the English coast from 1825. Charlotte collected fossils and sketched geological structures and landscapes. Roderick led fieldwork tours of England and Wales 1831-36 that resulted in the publication of The Silurian System in 1839. Despite many of the drawings and sketches in the book being drawn by Charlotte, her achievements have never been celebrated as publicly as her husband's.
Today, Charlotte and Roderick Murchison lie buried in a large tomb in Brompton Cemetery. On the tombstone, Murchison describes Charlotte as "his devoted wife" and as "the only daughter of General Hugonin". No mention is made of her contribution to the study of geology.


Like Clerke and Murchison, Rachel Alcock (1862-1939) was privately tutored, but from 1886 she went up to Nenham College Cambridge where she took the Natural Sciences Tripos examinations. She remained at Newnham, researching digestive processes and the nerve distribution of primitive fish. Alcock developed a professional career in science, teaching female students morphology and anatomy at the Balfour Laboratory in Cambridge 18981 and 1898-99. Alcock died, aged 76, in Cambridge on the 2nd February 1939 and was cremated at Cambridge City Crematorium five days later. Her ashes were scattered in the Crematorium Gardens the following day.


Just under a year later, on the 16th January 1940, zoologist Alice Johnson (1860-1940) was also cremated at Cambridge City Crematorium. Johnson had been born in Cambridge into an academic family. Her father was a school master and her brother became a logician. Helped by a supportive family, Johnson was able to enter Newnham College in 1878. Like Alcock, she studied the Natural Sciences Tripos and went on to work as a demonstrator at the Balfour Laboratory. Her later research into the early development of the newt was published by the Royal Society. However, from 1890 she was as a private secretary to Eleanor Mildred Sidgwick, firstly when Sidgwick led research at the Society for Psychical Research and then when she became principal of Newnham College in 1892. Joihnson became an associate of Newnham in 1893. She died in Cambridge, aged 79, on the 13th January 1940.


All four of these women were pioneers in scientific thought and made major contributions to science in Britain and the world. Yet they are not as well-known as male scientists of similar output and their careers were limited. It is frustrating to think what discoveries could have been made if these women, and others from less privileged financial backgrounds, had received greater opportunities to research and more enthusiastic support for their writing and lectures.

Hopefully, the implementation of an annual International Day of Women and Girls in Science will create better chances for girls and women in science today, and encourage the exploration of the work and lives of the female scientists who came before.

Do you have any female scientists in your family tree, or have you found other scientific women in the Deceased Online database? Either way, we'd love to hear from you. Please contact us on on our Facebook and Twitter pages, or in the Comments Box below!