This week I continue my series on Deceased Online's
Highgate Cemetery Collection with an introduction to some of the many artists among its records.
Anyone who has strolled around the monuments and foliage of this Magnificent Seven cemeteries is struck by the number of unusual, artistic headstones. Mostly, these belong to artists who chose Highgate as their final resting place. Below I highlight some of the remarkable artists buried here along with images of their memorials.

Artists of all kinds abound in the registers of Highgate Cemetery. These registers, now digitized and available to search on Deceased Online, include the names (and sometimes addresses) of some of the most significant painters, sculptors and illustrators of the 19th and 20th centuries. Buried close by are also their muses.
The achievements of painter, Charles Landseer (1799-1879), have been overshadowed by those of his more famous brother, Sir Edwin Landseer. While Edwin is renowned for his animal paintings, such as "The Monarch of the Glen", Charles focused on historical subjects,such as "The Temptation of Andrew Marvel" (1841) and "Cromwell in the Battle of Naseby" (pictured). Born into an artistic family, Charles and Edwin were the sons of John Landseer (1769-1852), a celebrated engraver. John tutored his sons in art, and sent Charles to the Royal Academy Schools in 1816. Charles became an associate of the Royal Academy in 1837 and was appointed Keeper of the RA in 1851. On his death in July 1879 at the age of 80, Charles left 10,000 guineas to the Royal Academy to fund scholarships. He was buried at Highgate on the 25th July 1879 in the same grave as his father, John.

Landseer was is just one Royal Academician among many buried at Highgate. The Royal Academy of Arts (now situated in London's Piccadilly) was founded in 1768 to promote the arts in Britain. Joshua Reynolds was appointed its first president. The original membership of 40 was filled by the most prominent artists of the time, including Thomas Gainsborough, Angelica Kauffman and Francesco Zuccarelli. The Royal Academy Schools was the first in Britain to offer professional training for artists, enrolling around 25 students each year.


Another prominent Academician buried in Highgate was the sculptor, Edward Hodges Baily (1788-1867). Born in Bristol, Baily moved away from a planned mercantile career, to work on the production of wax models. Baily moved to London in 1807 and entered the Royal Academy Schools two years later. In 1881, he was awarded the RA gold medal. Among his best-known works is the statue of Lord Nelson at the top of Nelson's Column in London's Trafalgar Square and the sculpture of hymn writer, Dr Issac Watts, in Abney Park Cemetery. The lions at the base of Nelson's Column were designed by Edwin Landseer, brother of Charles (mentioned above). Baily died on 22nd May 1867.
Alfred Stevens (1817-1875) was a sculptor, designer, and decorative painter who trained in Florence and Rome. Based in London, he is chiefly remembered for the Wellington monument in St Paul's Cathedral which was completed after his death by Hugh Hutton Stannus and John Tweed. Stevens life ended when he was just 57, with the cause of death remaining uncertain. Stevens was buried in the West Cemetery on 5th May 1875. 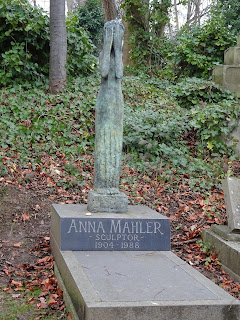 Anna Mahler (1904-1988) was born in Austria to the renowned composer, Gustav Mahler and his wife, the composer and socialite, Alma Schindler. After a difficult childhood and a brief early marriage, Mahler moved to Berlin to study art. By 1939, she had left Nazi Austria to live in London's Hampstead. She later lived in California but returned to London in the 1960s after her mother died. She then moved to Italy but died in 1988 while visiting her daughter, Marina, in Hampstead. Anna Mahler was buried in the East Cemetery on 19th June 1988.
Philip Consibee (1946-2008), Art Historian, grew up in London, where he trained at the Courtauld Institute, but moved to the USA in the late 1980s. He became a US citizen in 1994 and was appointed Curator of the National Gallery of Art in Washington DC. He died in Washington in 2008 and his body was returned to England for burial. His published works include Painting in 18th-Century France and Cezanne in Provence (2006). 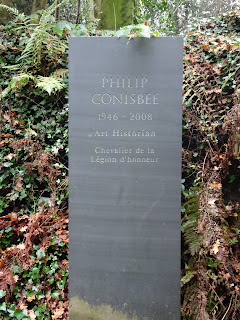 Away from the fine arts, you will find creative memorials to numerous writers, musicians and actors. Some of these will be discussed in more detail in next week's blog looking at the history of the cemetery in the 20th century.

All Highgate Cemetery records are available now on Deceased Online. They include digital scans of original registers, grave details indicating all those buried in each grave, and section location maps for graves (unfortunately, maps for a few graves are not available).

Although Highgate Cemetery's registers contain many famous names, not everyone buried there was well-known. We would love to hear from you if you have found any ancestors buried there. Just post a message via the Comments Box below, or on our Facebook or Twitter pages!