January 06, 2017
A deeper look at the Victorian records of
Deceased Online's
new Highgate Cemetery Collection
Like the other Magnificent Seven cemeteries, Highgate is celebrated for its Victorian funerary architecture, particularly those of the gothic tradition. This week's post highlights some of the lives of the Victorians buried in the north London site.

The Victorian records on Deceased Online cover 1839 to the early 1870s, with a gap between 1863 to 1865. The first burial took place in 1839 in what is now known as the West Cemetery. Fifteen years later, in 1854, the London Cemetery Company sought to expand the burial ground by purchasing the area opposite the cemetery, across Swain's Lane, that now forms the East Cemetery.
Some of the most identifiably Victorian of the monuments and headstones lie in the West Cemetery. These include the celebrated Egyptian Avenue, a walkway bordered by sixteen vaults that leads to the Circle of Lebanon, created by earth taken from around an ancient Cedar of Lebanon. The neighbouring Terrace Catacombs was built in 1842. Along with seventy other monuments, these gothic wonders have all been listed by English Heritage.
Among the numerous celebrated Victorians who have been laid to rest in the West Cemetery is the bare-knuckle boxer, Tom Sayers (1826-1865). Sayers rose from the slums of Brighton to becoming a national hero. Having worked since childhood, Sayers travelled to London when he was thirteen, taking work as a builder. He settled in Agar Town, St Pancras in 1846, moving to Camden Town the following year. An experienced fighter informally, Sayers fought professionally from 1849, winning almost all his (often illegal) fights, including those against heavier opponents, such as Harry Paulson, Bill Perry (the Tipton Slasher) and the US champion, John Camen Heenan ("Benicia Boy"). American and British audiences lapped up coverage of the last fight. This ended in controversy after police arrived and Sayers was declared the winner. In the end, championship belts were awarded to both men. Tom Sayers died at the young age of 39, after years of ill health and heavy drinking. Crowds flocked to watch his cortege travel to Highgate Cemetery for burial. His tombstone is marked by a statue of his pet mastiff, Lion, watching over him in death. 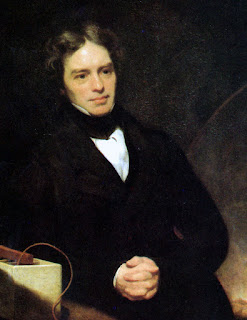 Michael Faraday FRS (1791-1867), one of the most significant scientists in Western history, is buried in the nonconformist section of Highgate Cemetery. Although eligible to be buried in Westminster Abbey alongside his hero, Sir Isaac Newton, Faraday had repeatedly refused this, preferring a more modest memorial (as befitted his nonconformist beliefs). He was born in Newington Butts, then in north Surrey, in 1791 and received little formal education. Apprenticed to a bookbinder and bookseller at the age of 14, Faraday seized the opportunity to read the books surrounding him. He was particularly inspired by the books on science he read and towards the end of his apprenticeship, in 1812, the 20 year old Faraday began attending scientific lectures given by Sir Humphry Davy. In response to the lectures, Faraday compiled a 300-page book of notes. He sent this to Davy, who later (after his eye was damaged in an accident) offered Faraday the opportunity to be his assistant. Soon afterwards, on 1 March 1813, Davy promoted Faraday as Chemical Assistant at the Royal Institution.

Thanks to the opportunities provided by Davy, Faraday was able to develop his theories of electromagnetism and electrochemistry. His most significant contribution on modern scientific thinking is probably his research on the magnetic field around a conductor carrying a direct current which established the concept of the electromagnetic field in physics. As well as this, Faraday discovered the chemical, benzene, invented an early form of the Bunsen burner, and contributed to scientific vocabulary. His work inspired some of the greatest scientific minds of the twentieth century, including Albert Einstein.

A devout Christian, Faraday married in 1821, but had no children. He died, aged 75, at his home in Hampton Court in 25 August 1875. He was buried in Highgate a few days later. His wife, Sarah, was buried alongside him after her death in 1879.

In 1880, one of the leading novelists of the Victorian era, George Eliot (1819-1880), was buried in Highgate East Cemetery. Although she was baptised "Mary-Anne Evans", the novelist's later married name of Mary Ann Cross is inscribed on her headstone below that of her pen-name. Born in Warwickshire, Eliot left home after her father's death in 1849, and after travelling in Europe, she settled in London. Living and working in literary circles, Eliot met George Henry Lewes (1817-1878), a literary critic and philosopher, who encouraged her writing. She used the male name, George Eliot, to ensure that her writing would be taken seriously by contemporary publishers, many of whom were often resistant to female novels. Her first novel, Adam Bede, was published in 1859, and was followed by The Mill on the Floss, Silas Marner, Romola, the seminal Middlemarch, and Daniel Deronda. The two lived together but were shunned by many as Lewes was already married. After Lewes died in 1878, Eliot married John Cross. Eliot herself died in 1880 and was buried with George Henry Lewes in his grave at Highgate. 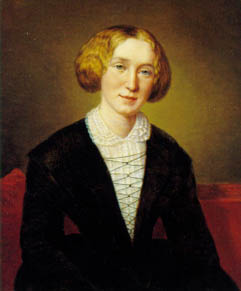 George Eliot left a strong literary legacy, with Middlemarch being hailed by many as the most influential novel in the English language. In The Common Reader, Virginia Woolf described the Middlemarch as, "one of the few English novels written for grown-up people". Her novels are noted for their social realism, with heroes that come from outside society, and often have a political emphasis. She depicted rural society as well as some of the difficulties of small-town life, such as gossip and ostracism of the unconventional. Outside of novels, Eliot worked as a translator and she also wrote poetry.

Karl Marx (1818-1883)
As I revealed in last week's post, the most visited grave in Highgate Cemetery is that of the philosopher and revolutionary socialist, Karl Marx. He was born into a middle-class, ancestrally Jewish family in Trier, Germany and grew up to study political economy and Hegelian philosophy. He travelled throughout Europe while developing his political philosophy. In 1849, he moved to London, where he remained for the rest of his life. While in England, Marx collaborated with fellow German, Friedrich Engels, with whom he had previously published The Communist Manifesto in 1848. This was the foundation for what became known as Marxist theory. His political theories, including his belief that capitalism would be eventually replaced by socialism following the uprising of the working classes, have been hugely influential on politicians, intellectuals, labour unions and artists across the world.
Notable Victorian Burials
Hundreds of other famous individuals were buried at Highgate between 1839 and 1901. Among them were:

All Highgate Cemetery records are available now on Deceased Online. They include digital scans of original registers, grave details indicating all those buried in each grave, and section location maps for graves (unfortunately, maps for a few graves are not available).

Look out for next week’s blog, where I shall look further into the history of Highgate Cemetery in the twentieth century. And please get in touch to let us know of any ancestors you have found buried in Highgate. Just post a message via the Comments Box below, or on our Facebook or Twitter pages!