August 28, 2015
This week, as Deceased Online adds records for four cemeteries managed by Wyre Council, I look at the oldest of these - the Victorian coastal cemetery of Fleetwood.
I grew up in a village in the Wyre district, spending my early childhood roaming marshland reclaimed from the wild Irish Sea. The winds can be high on this part of the coast, with regular rainfall from its wide skies. This fairly remote, rural outcrop of Lancashire and overlooks the Pennines and the magnificent Lake District across Morecambe Bay.Its key towns are Cleveleys, Fleetwood, Garstang, Poulton-Le-Fylde and Thornton. Wyre is located in mid/north Lancashire, a short tram ride from bustling Blackpool. The council is named for the river which runs through the area.
Since the history of Wyre is not widely known, I was delighted to discover that Deceased Online would be adding records from the region to its database. The addition of this latest collection brings the number of records on the website for Lancashire and Greater Manchester to nearly 5 million records for over 60 cemeteries and crematoria.

Although none of my ancestors are from the Wyre region, as a child I learned stories of the history and people in Fleetwood, Poulton le Fylde and Preesall whose cemetery records can now be explored online. A number of my school friends lived in Preesall and they should be able to find some of their family in the new collection. Common occupations throughout the 19th and 20th centuries included farming and agriculture, real estate, teaching, dressmaking and running small businesses. Large numbers of the population were employed in marine activities, including deep-sea fishing and oyster catching. Out at sea, fishermen would find themselves prone to sore throats and coughs. In 1865, Fleetwood pharmacist, James Lofthouse, created a menthol and eucalyptus liquid for local fishermen travelling in stormy and freezing conditions in the North Atlantic. Although the liquid eased their respiratory symptoms, the fishermen soon discovered taking medicine from a glass bottle on the high seas was difficult. As a result James transformed the liquid into a portable lozenge. This lozenge is now sold around the world as the Fisherman's Friend. James Lofthouse's family grave is located in the old part of Fleetwood Cemetery at location CE 733/734 21/5/1906. 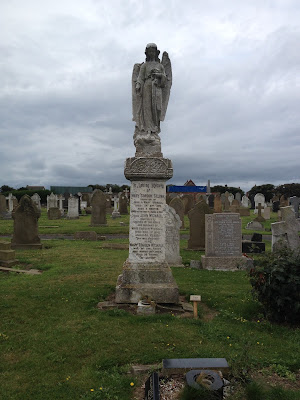 Fleetwood Cemetery is the oldest of the four Wyre cemeteries, dating back to 1841. The cemetery features large monuments and headstones, with several in the gothic style.
The cemetery is home to several war dead and includes official war graves. Wilfred Stanhope, holder of the Distinguish Service Medal Award and Chief Petty Officer on the H.M.Motor Minesweeper died, aged 24, on 6th October 1943 and is buried at RC/M/54. Ernest Victor Muir D.S.M., Sergeant on the H.M.S President III, was killed at 53 years on 25th April 1945 and lies in NC/E/280. 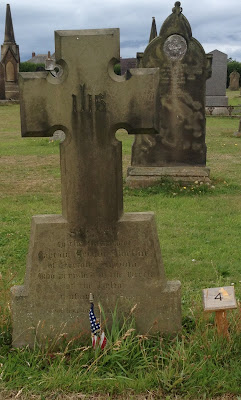 One of the more unusual military graves in the cemetery is that of Captain Arthur Sinclair, who is buried in the old part of the cemetery in plot CE/A/78. He died in January 1865 and was the only American Commander in Confederate Navy to be buried outside the USA. He was lost from the Leila while travelling to North Carolina in order to run the Union blockage during the Civil War. The paddleship was on its maiden voyage from Liverpool. His body was washed up at Fleetwood with the community paying for the burial and headstone.

The 290 Foundation reported that Sinclair's great,great grand-daughter and her son from Tennessee visited their ancestor's grave recently. Lelia Sinclair Dickey Baldasari was very grateful for the attention given to the grave by Fleetwood's cemetery department. She was also able to visit The Steamer Hotel in Fleetwood, where the inquest was held, and to see what has now been designated the 'Sinclair Room'.


Deceased Online hopes that many other family historians will now visit their anecstors' graves at Fleetwood Cemetery, locating them in the digitized burial records (nearly 35,000) managed by Wyre Council. The Wyre Collection covers the following:
The records for each burial comprise:
Do let us know via our Comments Box below or our Facebook and Twitter pages if you have ancestors in Fleetwood Cemetery - or any of the Wyre cemeteries. Were they fishermen or war heroes? Whatever they did, we love to hear from you!