Remembering the Poor of Southwark and Camberwell

August 01, 2015
This week Deceased Online uploaded a new collection for Camberwell Old and New Cemeteries. Inspired by a memorial in the New Cemetery, in this post I explore how the online database can help locate burial places of those interred in paupers' graves. 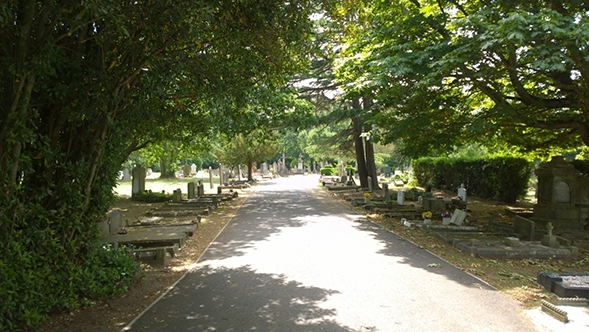 Like me, you may have ancestors who were buried in common graves. These were often referred to as "paupers' graves" as they were the resting places of those whose loved ones could not afford to pay for a burial and headstone. Many had no loved ones at all.

Deceased Online this week added burial records for Camberwell Old Cemetery and Camberwell New Cemetery. Like Nunhead Cemetery, these burial grounds lies in the modern London Borough of Southwark. The use of Southwark place names has changed over the years. Parts of Camberwell on an 1881 census entry, for example, may be known as Peckham today.

Southwark was a highly populous area in the Victorian and early 20th centuries. The three cemeteries that are now on Deceased Online include records of those who lived in Bermondsey, Rotherhithe, Borough, Walworth, Peckham, Camberwell, Peckham Rye, Nunhead and Dulwich. Camberwell Old Cemetery opened in 1856 originally as a burial ground for the parish church of St Giles, Camberwell. In 1874, land was added to the cemetery as nearby Nunhead could not cope with the demand for burial space. The third cemetery, Camberwell New Cemetery, opened in 1927.

Although parts of Dulwich and Camberwell were home to the members of the middle and upper classes, swathes of the Southwark area have long been associated with poverty. The leather workers of Bermondsey and the dock workers of Rotherhithe, for example, lived dangerous lives on tiny incomes. Overcrowding across those areas as well as in poclets of Camberwell and Peckham was rife. Consequently, the average life expectancy was low and bodies soon filled the cemeteries. There are over 300,000 people buried in Camberwell Old and Camberwell New cemeteries and a total of 700,000 for Southwark. In the 1840s, life expectancy for overcrowded working-class areas like Bermondsey were typically half that of middle-class areas of London.

Unsurprisingly, the burial registers of Nunhead and Camberwell Old and New Cemeteries reveal large numbers of common graves. Since most of the graves have no marker, they can be difficult to find. However, by using the name search on Deceased Online and identifying the common grave on the attached map, you can now locate your pauper relatives. By clicking on the option to see who else is buried in the grave, you should be able to identify whether your ancestor was buried in a common grave. Those who are buried with others close to the same date, but who are not known relatives, will usually be in a common grave.

In Camberwell New Cemetery, a headstone stands at the head of an arborial arch (see photograph above). The two walls on either side form a memorial to 400 civilians from the Second World War (1939-1945) "who are interred in the cemetery and have no marked graves". Its inscription reads:

The Borough of Southwark was hit hard by wartime air raids, leading to the deaths of hundreds of its residents. Many homes and municipal buildings were also hit. These included the Old Cemetery's Church of England and Roman Catholic chapels, both of which were destroyed. 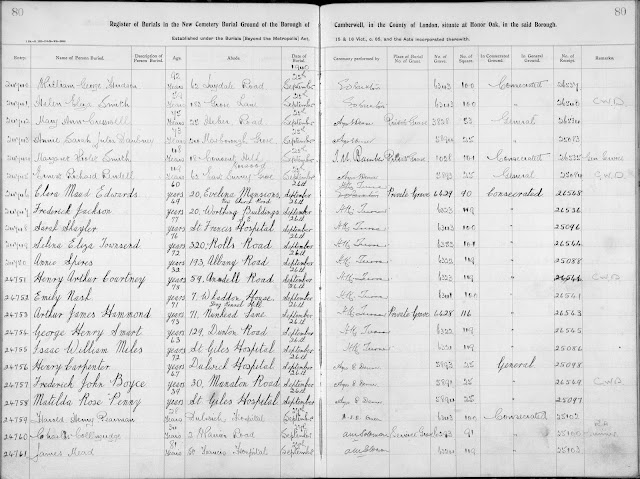 Above is the page of the Camberwell New Cemetery burial register for the 25-27 September 1940. Air raids had begun over London on the 7th September that year. The Luftwaffe would bomb the city for 57 consecutive nights. Among those buried on the 26th September was 47 year old Frederick John Boyce. He was killed on the 20th September. The register notes that he was buried in "General" ground - in other words, a common grave. In the "Remarks" column is a faint entry, reading "CWD" or "Civilian War Dead". Boyce had been a member of the Home Guard and was killed at home, 30 Manaton Road. He was the husband of Elsie Mabel Boyce and is one of the 400 civilians commemorated in the cemetery's rose garden.

Do let us know if you have ancestors who were buried in any of the three Southwark cemeteries. If the Deceased Online database has helped you locate an ancestor's grave, we'd love to see a photo! Please post photos or comments on our Facebook and Twitter pages, or in the box below.