October 21, 2015
Now that all Lewisham Council's burial and cremation records have been uploaded to the Deceased Online database, I look at the twentieth century history of the cemeteries at Brockley and Hither Green and discover how hard the area was hit by air raids during the two world wars.

Hither Green
Hither Green continued through the end of the 19th century and into the 20th as a popular resting place for the people of South East London. As for many across Britain, life in the Lewisham area was transformed during the course of the First World War.

War was declared on 4th August 1914 and on the 4th January 1915 the first official war burial at Hither Green took place. 53 year old Able Seaman Frank Finn RN 97447 of the HMS Pembroke died on the 29th at the Royal Naval Hospital in Chatham, Kent. Finn had previously served in the Egyptian Campaign of 1882-4 and left a widow, Jane Finn of 21 Medusa Road, Catford. His body was returned to South East London and he was buried in plot B 909.
By June 1920, the cemetery was home to 42 official war graves from the Great War alone.

On the night of 19th to 20th October 1917, the Hither Green area became a victim of the war when it was hit by a 300lb bomb from a Zeppelin L45. The bomb landed in Glenview Road [now Nightingale Grove], about a mile from the cemetery, destroying 4 houses and killing 5 women and 9 children. One man, Samuel Lilly Milgate, died 5 days later of his injuries. The complete list of victims is:
All victims are buried in Ladywell Cemetery.  This is now believed to have been the last bomb dropped by a Zeppelin on London during the Great War. Lewisham Local History and Archives Centre has a webpage dedicated to the air raid at http://lewishamwarmemorials.wikidot.com/incident:air-raid-ww1-19-20-october-1917.

After the war, the respected local historian Leland Lewis Duncan (24 August - 26 December 1923) was laid to rest in Hither Green. Duncan was born in Lewisham and lived there throughout his life. He worked as a civil servant but developed interests in history and archaeology. This led to his appointment as general editor of Challenor Smith's 1893 Index of Wills (British Record Society, 1893). He is remembered today for the extensive research he undertook on the history of Kent, including his book, The Parish Church of St Mary, Lewisham (1902), The History of the borough of Lewisham (1908) and The History of Colfe's Grammar School and a life of its founder (1910). Although he had planned to work further on his historical research when he retired, Duncan sadly died the following year. In memory of Leland L. Duncan, Lewisham Local History Society erected a gravestone to the right of the entrance of Hither Green Cemetery in 1998.

Like much of the capital, South East London was hit hard during the air raids of the Second World War. One of the most upsetting incidents was the bombing of Sandhurst Road School in Catford on Wednesday 20th January 1943. Only a distant air raid siren had sounded before the attack, giving little warning that a German fighter-bomber was about to drop a 1,100 lb bomb on the school. The time was 12.30pm when many of the teachers and pupils were eating their lunch. 38 people were killed outright (of these, 28 were in the dining room), 6 died later in hospital, and around 60 people were injured, with some having spent a terrifying few hours buried under the rubble while parents searched desperately for their missing children. 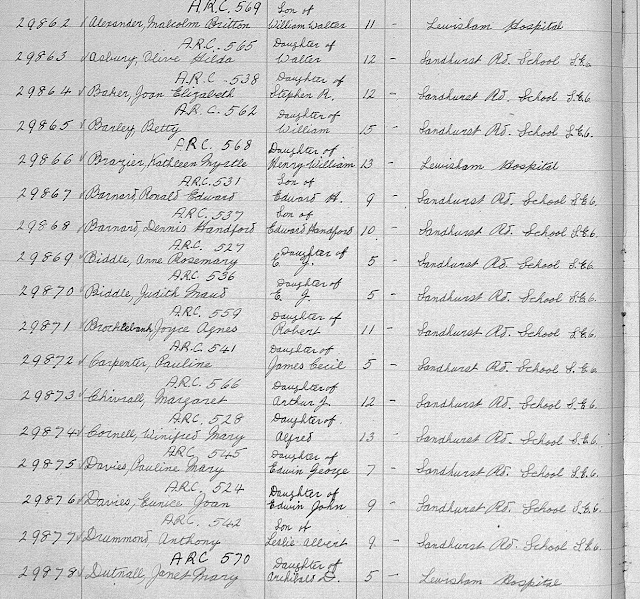 33 of the 44 victims of this daytime raid were buried in a civilian war dead plot in Hither Green during a ceremony conducted by the Bishop of Southwark. More than 7,000 mourners attended. The image above is a close-up of a page in the burial register showing name after name of children whose place of death is given as "Sandhurst Rd. School S.E.6.". Two of the victims, 5 year old Anne Rosemary Biddle and Judith Maud Biddle, the daughters of E. J. [should be R] Biddle, appear to have been twins. Their mother, Edith Rose Biddle, served as a Private in the ATS and was killed a few months later in November 1943. She also lies buried in Hither Green.

In 2009, a number of Sandhurst Road School survivors spoke to the Daily Mail about their memories of being at school when the bomb hit. Eric Brady was then 75 but could still vividly remember the experience - which put him in hospital for 18 months. Sadly, Eric's 14 year old sister, Kitty, was one of those killed. In his account he revealed that this school and five others had been deliberately targetted by the Luftwaffe. Eric remembered that Kitty had been talking to a teacher when they heard a distant siren. She was told to go to the dining hall to tell the children there to go to the shelter, but just as she arrived, the bomb fell. At that moment, Kitty had called out to Eric. Although he tried to shelter under a table, Eric was hit by falling masonry and sustained damage to his head, arm and leg. His sister was found nearby. It was believed that she had saved his life. Eric was sent immediately to hospital and only learned of his sister's death some time later.

Air raids continued over Lewisham until March 1945. From June 1944 Germany launched the V1 "Doodlebug" attacks. Lewisham was the third hardest hit London borough by V1s (after Wandsworth and Croydon). During this period 126 civilians were killed by V1s in Lewisham.

One of the worst Doodlebug attacks took place at 9.41 on the morning of Friday 28th July 1944 when shoppers and traders were hit without warning in the bustling market and high street. 28 civilians were killed out right, with at least 83 injured. By September the number of casualties had risen to 52. A full list of the victims of the raid can be found on Lewisham Local History and Archives' site at http://lewishamwarmemorials.wikidot.com/names:lewisham-high-street-v1-incident-names Burial records for those killed from Hither Green and Ladywell Cemeteries can be found in the Deceased Online database.

With the dawning of the new century in 1900, Brockley Cemetery continued as one of the major burial places in the Lewisham area. Above is the grave of George Pitt, who was tragically thrown by his horse and killed at a charity fundraising carnival.
In March 1931, the Christian Socialist Margaret McMillan (20 July 1860 - 27 March 1931) was buried at Brockley. Her sister, Rachel, also a renowned educational reformist is buried alongside her in the same grave. The sisters were born to Scottish parents who had emigrated to New York state. After the death of their father and sister, the family returned to Scotland. Margaret was well educated and was introduced to Christian Socialism in 1887 by her sister, Rachel. The sisters became very active in the movement, working alongside William Morris and joining the newly-formed Labour Party in 1902. Around that time, Margaret developed a strong interest in health and education and began publishing books on these subjects. It was partly thanks to Margaret that the Provision of School Meals Act was passed in 1906. While continuing to campaign on these issues, Margaret and Rachel opened clinics for children, became suffragettes and founded an Open-Air Nursery School & Training Centre in Deptford, near Lewisham. In the midst of their work at the Centre Rachel died in 1917. Margaret renamed the nursery, the Rachel McMillan College. After meeting with Rudolf Steiner, Margaret became an advocate for the Steiner schools' movement. Demonstrating her continuing devotion to the memory of her sister, one of Margaret's last acts was to found, in 1930, the Rachel McMillan College for training nurses and teachers in Deptford.

Like Hither Green, the area around Brockley Cemetery was severely affected by the air raids of the First and Second World Wars. Of the original 4 chapels in Brockley and Ladywell cemeteries, 3 were destroyed between 1940 and 1945. Many memorials were also damaged or destroyed. As family historians, it is important to bear this is mind when searching for ancestors' graves. Fortunately, all the records have survived and are searchable on the database.
Thank you to all those who attended Lewisham Council's Open Day at Brockley and Ladywell Cemeteries last weekend. It is always enjoyable to meet users and we appreciated the great distance that many of you travelled to attend. As always we love to hear from you and if you have any stories to share from the Open Day or have a connection to any of the Lewisham cemeteries, please contact us in the Comments Box below or on our Facebook and Twitter pages.