This week we uploaded the final set of records from Lewisham Council. Among the new data on Deceased Online are the burial records of Hither Green Cemetery.  This includes details of 81,000 burials and nearly 250,000 records (data items). The last two cemeteries to be included for Lewisham are Hither Green and Brockley which have served large parts of South London since the mid-19th century.
Hither Green Cemetery (formerly Lee Cemetery)
Hither Green was opened in 1873 - 15 years after Brockley and Ladywell. Hither Green Cemetery is laid out next to Lewisham Crematorium - formerly, the Hither Green Crematorium (opened 1956), whose records are also in the database. The cemetery's official address is Verdant Lane in Grove Park. Originally known as "Lee Cemetery", Hither Green was designed by Francis Thorne (buried here in 1885) with ornamental iron entrance gates, an entrance lodge (demolished in the 1960s) and two gothic chapels. 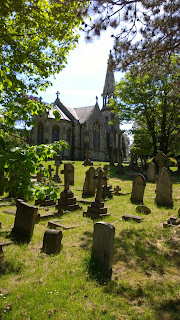 Like Brockley and Ladywell, Hither Green is also a beautiful, contemplative space with a wide range of mature plants and trees. More unusually, in the autumn and winter months, Hither Green is home to up to 100 ring-necked migrant parakeets. 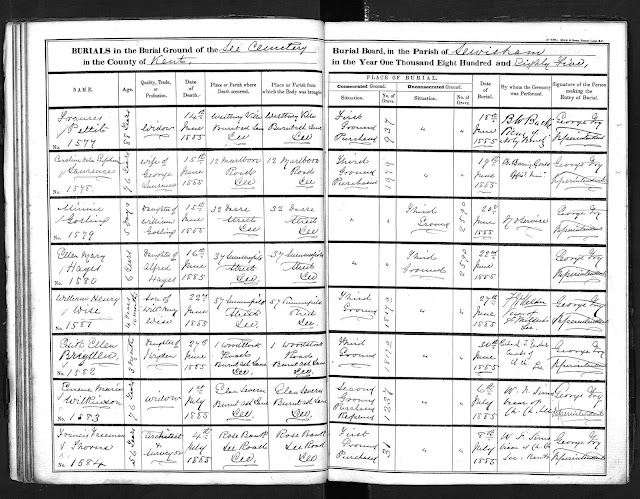 Above is the Brockley burial register for June to July 1885. This is a clearly presented register, with full details included in almost every column. The last line contains the burial entry of Francis Freeman Thorne, who died in on the 4th July 1885 aged just 56 years. He was buried four days later. His occupation was given as "Architect and Surveyor". There is no mention here of the fact that this is Frank Thorne, the man who designed the very cemetery in which he was now being laid to rest. His home had been  "Rose Bank" in Bridge Road, Lee. Thorne was buried in the First Ground in a "Purchased" plot.

Brockley Cemetery
Last week I looked at Brockley's Victorian years. This week I had planned to move into the 20th century, but I was contacted by Geri Newell in Canada who has an amazing tale to tell of her 19th century ancestor who, like many of those buried in the cemetery, had a fascinating life but is not well-known today.

Geri's great grandfather, William John Newell, was born in Bermondsey in 1853. Geri told me that Will (as he was known) set up the W.J. Newell Estate Agency and Auction house at 487 New Cross Road, in Deptford, where he lived above the shop. A few years after his marriage to Alice Rebecca Attfield, and having two daughters and two sons, he bought a house around the corner on Florence Road, and let out the flat above the shop.

In 1894, Will became Grand Master of the Excelsior Lodge in London, and a portrait was painted of him for that occasion. Serving as the organist at the Lodge, Will was affectionately known as “The Big Mason” by his family. He had also served as church warden at St. Paul’s, Deptford.


One of Will's great nieces grew up hearing anecdotes about him from her mother, such as, “Will regularly enjoyed a pint,” and that whenever one of his staff would sell a house, he would take everyone in the office out for dinner and a few drinks at the local pub near Broadway and New Cross Road. His wife, Alice, suspected that this was a ploy to go to the pub more often and would often comment that his top hat was “at a precarious angle on his head whenever a house was sold”.

Tragically, on February 26, 1896, at his country house, Dovedale, in Welling, Will was found in bed, shot in the head, a revolver by his side. A note at the side of the bed read: “Farewell everybody. I am in mortal agony. I know I am mad. De mortuis nil nisi bonum.” ["Say nothing but good about the dead."] At an inquest, the Deputy Coroner said, “The case was a very shocking one. Hardly anyone was better known than the deceased and his sad death was a dreadful surprise.” The jury returned a verdict of “suicide whilst suffering from temporary mental derangement.”

Will was given a splendid funeral at Brockley on 3rd March 1896. One newspaper commented:
The cortege left Dovedale at one o’clock, consisting of an open car
and pair containing the body which was covered with wreaths
<and crosses, and four carriages and pairs, proceeding via Shooter’s
Hill to New Cross by deceased’s offices, then via
Florence Road to Brockley Cemetery, arriving there at 2:30.
There the funeral was met at the entrance gates by the mace bearer
and Chaplain, being attended by about 100 masons,
wearing acacia, who lined the entrance to the chapel and then followed deceased to
the family vault. There was also a very large company of friends present.
A large number of Freemasons, who were present, filed
past the grave and dropped the customary sprigs of acacia on the coffin.

Although Geri lives in Canada, whenever she travels to London she makes time to call at her great-grandfather's grave at Brockley.  In 2010, Geri also visited his former home and workplace in New Cross Road.
A big thank you to Geri and all the other blog readers who got in touch last week to tell me about their Brockley ancestors. Jill in Australia told me about her relatives' grave: "'I am grateful to a person who volunteers with RAOGK 'Random Acts Of Genealogical Kindness' who spent the time looking for the grave. It would probably be helpful for people to know that sometimes an inscription for a grave is along the side, rather than a headstone'."


In next week's blog, I'll be exploring both Brockley and Hither Green cemeteries in the twentieth centuries.

Come and meet us! Members of the Deceased Online team are looking forward to meeting you at the Brockley & Ladywell Open Day on Saturday 17 October. The team will be demonstrating records and this will be your chance to explore the Lewisham Collection and to ask any questions you may have about Lewisham (or any of our other records) face-to-face. For more details, see Lewisham Council's Events Page.

Don't worry if you can't make the open day. If you have any comments or questions about any of the cemeteries or crematoria in the Lewisham Collection, just drop us a line in the Comments Box below or on our Twitter and Facebook pages!