October 03, 2019
This week's blog marks the International Day of Peace 2019 and Gandhi's 150th anniversary by remembering
a friend and colleague of Gandhi in our collections 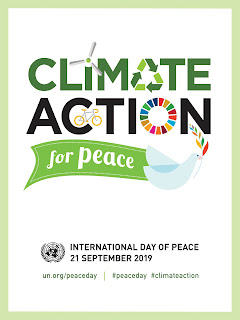 The United Nations International Day of Peace takes place each year on 21 September to celebrate a peaceful society is one where there is justice and equality for everyone. The theme for 2019 is: “Climate Action for Peace”.

The United Nations Member States adopted 17 Sustainable Development Goals in 2015 to ensure peace through the protection of human rights for all. The Sustainable Goals include poverty, hunger, health, education, climate change, gender equality, water, sanitation, energy, environment and social justice. Sustainable Development Goal 13 “Climate Action” is a call for immediate action by all to lower greenhouse emissions, build resilience and improve education on climate change. Today highlights the importance of combating climate change as a way to protect and promote peace throughout the world.


Although it may not seems obvious, climate change  threatens international peace and security in a number of ways. These include:

“His vision continues to resonate across the world, including through the work of the United Nations for mutual understanding, equality, sustainable development, the empowerment of young people, and the peaceful resolution of disputes”,
He added that before his assassination in January 1948, after the bloody partition of India the previous year, Gandhi constantly spoke of, “the gap between what we do, and what we are capable of doing”.
The the UN Secretary-General asked that, “On this International Day, I urge each and every one of us to do everything in our power to bridge this divide as we strive to build a better future for all” - just as Gandhi did. He continued, “Part of his genius lay in his ability to see the interconnectedness and the unity between all things”.
Deceased Online is marking the day by honouring one peacemaker that we have discovered in the database within the Oxford City Collection, in the records of Wolvercote Cemetery. UN worker and personal friend of Mahatma Gandhi, John Richard Charters Symonds (aka Richard Symonds; 2 October 1918 – 15 July 2006).


Symonds was an academic and civil servant, who worked hard in humanitarian service in India after the partition from Pakistan and, after contracting typhoid fever, was cared for by his friend, Gandhi. Symonds worked for the UN for nearly 30 years. Symonds wrote about his relief work in the former colonies, and was a champion of gender equality.

Do you have any humanitarian workers or peace activists in your family? Do get in touch and let us know via the Comments Box below or on our Twitter and Facebook pages!