Records from the London Borough of Lambeth's Lambeth Cemetery in south London are now available to view on www.deceasedonline.com.

Lambeth Cemetery, originally known as Tooting Cemetery, is home to a great many species of wildlife, including goldcrests, sparrowhawks, and woodpeckers, and provides the final resting place for over 250,000 people, including many famous music hall Victorians. 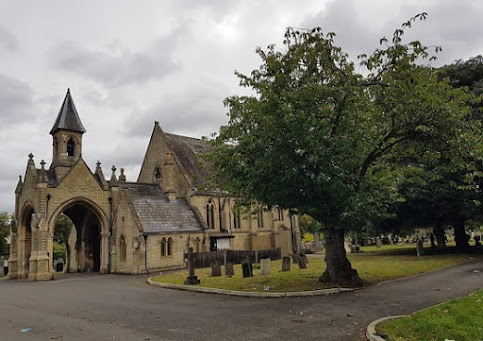 The music hall was a popular Victorian brand of theatrical entertainment, and involved songs, comedy, speciality acts, and variety entertainment.

One giant figure of music hall was George Wild Galvin, better known as Dan Leno (1860-1904), who was buried in Lambeth Cemetery. Dan Leno was a leading comedian and musical actor within music hall, and was also well known for his pantomime dame roles. His first solo stage appearance was at nine years old and, as a teen, he became the star of his family's act. By the late 1800s, Dan Leno was one of the highest-paid and most popular comedians in the world and, in 1901, he performed a sketch for King Edward VII at Sandringham, who was thoroughly impressed.

Leno was generous and charitable, particularly to the benefit of other performers in need, but increasing alcoholism and widespread rejection of his desires to become a serious dramatic actor led to a mental breakdown in 1903. He was committed to an asylum, to be treated by a Dr. Savage with 'peace and quiet and a little water colouring'. He was discharged later that year and performed again, but from there, his health further declined and he died in November 1904 aged only 43.

We would love to hear of any of your ancestors or other interesting people whose records you have found in the collection. Do leave a comment in the box below, or contact us via our Facebook or Twitter pages!

May 29, 2014
Deceased Online has just uploaded around 114,000 burial records from Spa Fields in the modern London borough of Islington Spa Fields today, with the Church of Our Most Holy Redeemer in the background Spa Fields Burial Ground became notorious in the 19th century for its overcrowded and insanitary conditions. Located in the parish of St James, Clerkenwell, the grave yard was not far from the ever-increasing City of London. Spa Fields was known also as Clerkenwell Fields and Ducking-pond Fields in the late 18th century, hinting at a dark side to what was then a summer evening resort for north Londoners. What would become a cemetery was a ducking pond in the rural grounds of a Spa Fields public house. It was here in 1683 that six children were drowned while playing on the ice. In his History of Clerkenwell (1865) William J. Pinks wrote that visitors, "came hither to witness the rude sports that were in vogue a century ago, such as duck-hunting, prize-fighting, bull-baiting
36 comments
Read more

February 12, 2015
Coming soon to the Deceased Online database: two historic cemeteries from Nottingham City Council to add to the Nottingham Collection . This week, I explore the history of the renowned Church Cemetery (also known as the Rock Cemetery) . At first glance, the modern visitor to Nottingham's Church Cemetery may think they have wandered into Kensal Green , or another of London's Magnificent Seven cemeteries. The 13 acre site abounds with the kind of gothic stone monuments and large sarcophogi with which the mid-Victorians liked to remember their dead. Yet look harder and you will find something unique to Nottingham - sandstone caves. Since the middle ages, the area around Nottingham was quarried for its sandstone, now known by the name of a nearby village as "Bulwell sandstone". From 1851, after the cemetery was laid out on the former sandpits, local people grew to know it simply as "The Rock".  Church Cemetery Otherwise known as the Rock Cemetery on a
10 comments
Read more